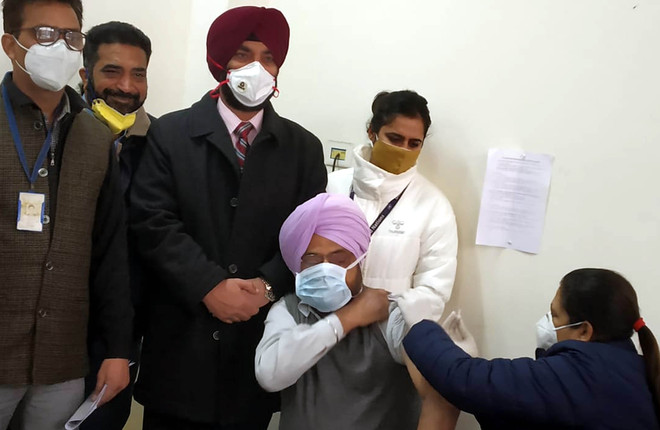 Amritsar Civil Surgeon Dr RS Sethi getting a shot of Covid vaccine at the Civil Hospital.

After getting a lukewarm response from health workers, the Health Department has asked senior officials to get vaccinated and set an example for their juniors. The department has also asked health administrators to personally motivate the employees, especially program officers, so that junior staff gets motivated to receive the vaccine dose.

The district Health Department has stepped up efforts to encourage and motivate its staff, especially senior doctors, so that the confidence of workers in the Covid-19 vaccine can be built. The move has helped the department in increasing the number of volunteers for getting the injections. The department stated that a total of 120 health employees received the vaccine on Monday.

However, on the first day of the vaccination drive on January 16, the department had reported only 79 volunteers. While reiterating that the vaccine is completely safe and no major side-effects have been reported by employees who received the injections so far, Civil Surgeon Dr Charanjit Singh said the number of vaccine takers would rise further in the coming days.

“Some people may hesitate initially but with time everybody knows that immunity against the virus is the best option,” he said, adding that senior officials of the department were also getting the vaccine so that their juniors could be motivated.

Earlier, the employees’ association at the Civil Hospital also demanded that senior bureaucrats and politicians should get the vaccine so that others were encouraged. Many media reports questioning the competency and efficacy of the new injection had resulted in creating a suspicion in the minds of employees.

District Immunisation Officer Dr Sukhpal Singh said, “The process is being streamlined and people are coming forward to get the injection. Health employees are also being made aware of the need for vaccination. Health workers have been at the forefront of the battle against Covid-19 and the government has honoured their services by choosing them for vaccination in the first phase. The district would get more stocks of the vaccine in the coming weeks.”