WHERE ARE THEY NOW 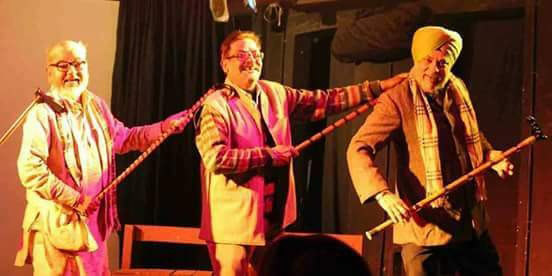 Stills from different plays being staged at various platforms.

Jagdish Sachdeva, popularly known as Jagdesh Sachdeva Natakar, requires no introduction in the field of theatre.

The novel playwright and director is recognised for his plays that talks about marginalised people.

Many of his plays and works remained a favourite topic of research among students. A critical book on his plays was released this year. The book “Jagdish Sachdeva Da Rangmanch Sansar” was edited by Dr Naresh Kumar. Around 20 Punjabi writers have critically written about his plays in the book.

After remaining committed to theatre for nearly four decades, Sachdeva is now moving his focus towards Punjabi films. He was seen in two Punjabi movies including 47 to 84 while he also completed shooting for Shahid Kapoor starrer ‘Jersy’, in which he is playing a cricket coach.

During these testing times, because of unprecedented health crisis all over the world, people were forced to remain indoors and this gave ample time for theatre personalities and artistes to analyse and work on their future projects. The same holds true for him, too. Sachdeva said during lockdown, he read and worked on different scripts of plays and Punjabi movies.

“I was approached by the film fraternity for writing scripts of Punjabi movies. I wrote scripts of Jattu Nikhattu, an autobiography of common man and Har Maidan Fateh,” he said. He even played a role in Jattu Nikhattu. He said Har Maidan Fateh would be going to sets soon. He is also working on the script of another Punjab movie Jugni weds Jubliee based on urban life.

Sachdeva is also known as the Big Showman of Punjabi theatre and runs his theatre group Natkar Amritsar. Known for producing top high quality plays, he is also ready with play ‘Mem’ based on the life of a woman, who lost his mental balance after making huge sacrifices during the Partition of India and Pakistan. “Due to the lockdown, the staging of play was delayed,” he said.

He had four books based on his four renowned plays Chowk Dholian, Saavi, Sugar Free and Ghugu Ghore Bande in his name. He said the latest play ‘Is Jagah Ik Pind Si’ is being translated in English and published by Bhartiya Sahitya Akademi. Before this, Punjabi Sahit Akademi, Delhi, had published his play Saavi in English. A Hindi film was also made on this play – “Saavi Ek Anokhi Dulhan”.

At a time when people think about retirement, he is still active in theatre and now in Punjabi and Hindi movies.