Say complaints regarding snags and faults not being addressed on time 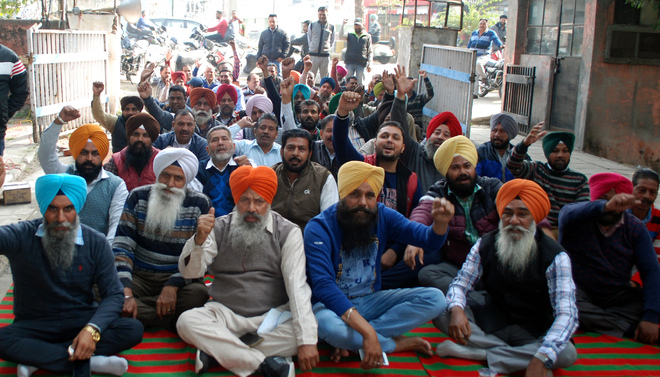 Power corporation employees continue with their protest for the 13th day in Amritsar on Saturday. Tribune photo

The protest by the Punjab State Power Corporation Limited (PSPCL) employees entered the 13th day on Saturday resulting in inconvenience to the general public as the complaints regarding snags and faults are not being addressed in time.

The power corporation has assigned duties to senior officials, including SDOs and XENs, to stay at power grids even during nights, but in the absence of the lower staff, they too are unable to get the work done.

An official of the PSPCL said: “In case of a technical fault, the redressal of complaint may take unusually long as employees are on mass leave.” He said senior officials were managing the stations with whatever little help they can get from here and there.

The employees are holding regular protests at sub-stations in rural areas and circle offices in the city. The employees’ leaders said earlier they hoped that the issues would be resolved in the November 26 meeting, but as the results were not encouraging, the protest has been extended till December 2. The employees’ union has announced to gherao Chief Minister Charanjit Singh Channi on December 2.

The coordination committee has also announced to take out a bike rally in the city on November 30. Rajinder Singh, president, Technical Services’ Union (Vigyanik Group), said: “We have been fighting for our rights for the last 11 years. Every time, the management runs away from fulfilling its promises which are made during negotiations. Now, it has happened again.” He said the coordination committee of the PSPCL employees has submitted a list of 32 demands.