To gherao CM’s residence in Chandigarh on September 10 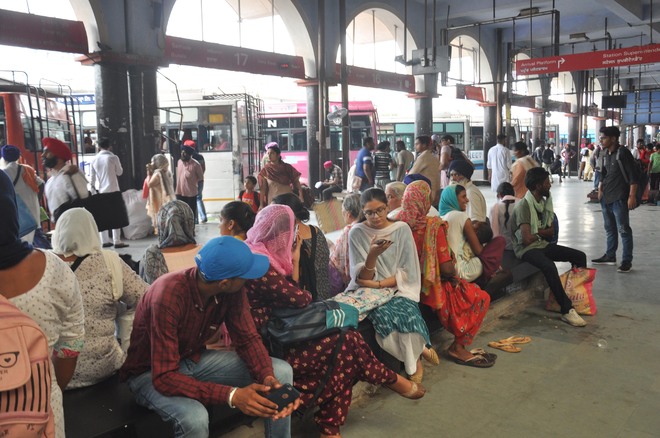 The Punjab Roadways PUNBUS Contractual Workers’ Union will hold a four-hour protest at all bus stands across the state from 10 am to 2 pm on Thursday.

Jodh Singh, senior vice-president of the union, said they were being compelled to lay siege to the residence of Chief Minister Capt Amarinder Singh in Chandigarh on September 10.

“We demand regularisation of 7,500 contractual workers employed by the PRTC, pay parity and reinstatement of those staff who have been shown the door after putting conditions,” he said.

The indefinite strike of the contractual workers entered third day today. Neither PUNBUS, nor PRTC buses, plied from the Shahid Madan Lal Dhingra Inter-state Bus Terminal (ISBT) today. However, buses having regular staff ferried passengers. There was no impact on movement of private buses, which plied without hassle and passengers could be seen waiting in queues to board buses.

An urgent meeting of the Employees and Pensioners’ Joint Front was held on Wednesday, where members of the district units of Punjab and UT employees and pensioners announced that they will join the sate-wide rally scheduled in Chandigarh on September 11.

The protest march will be held towards the Chief Minister’s residence and a convoy of 20 buses from Amritsar will join them. District convener Gardeep Singh Bajwa said the decision of the Cabinet to reject the demands of nearly 6 lakh employees and pensioners of Punjab was a betrayal. As per the demand of the united front of the pensioners, the minimum increase in pay in different categories will not be accepted by them. There was a massive outrage among Punjab employees and pensioners against the government over the cancellation of old pension scheme, non-implementation of Centre scale on employees recruited after July 2020, payment of basic pay during probationary period under notification dated January 15, 2015. The Punjab and UT employees and pensioners will be holding a rally on September 11 in Chandigarh.

No bus service from Tarn Taran to Chandigarh

Contractual workers of the state-run Punbus and PRTC buses held a motorcycle rally in Tarn Taran on Wednesday. The ongoing strike has created great hardships for long- distance passengers as private transporters do not have a permit for Chandigarh. The protesting employees started the march from the roadways depot, which concluded at the District Administrative Complex (DAC) . Satnam Singh Tur, chief, Roadways Depot, said the state government has totally failed to fulfil any of the promises it made with employees, farmers, students and other sections of society. He said the agitating staff working from the last 15 years has been demanding regularisation of their services. The protesters blamed the state government for privatization of various departments, including health, education and roadways. They said neither they have been regularised nor vacant posts have been fulfilled. Members of the union said the stir would continue as long as their demands would not be accepted by the state government. OC