Covid-19 guidelines go for a toss outside banks 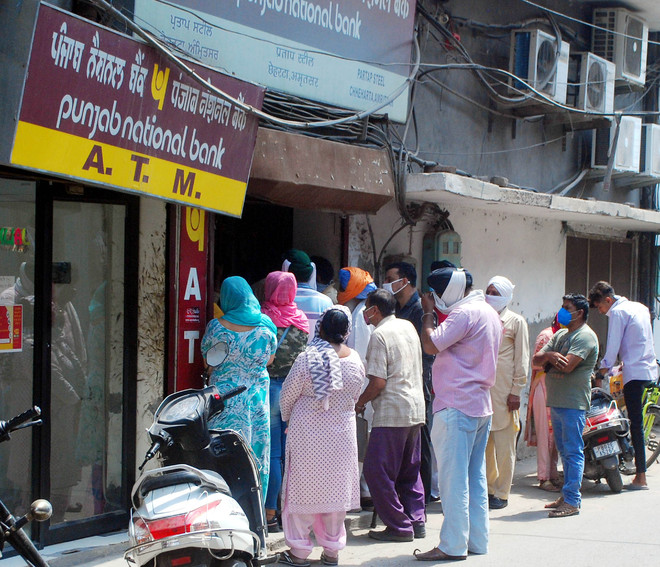 People line up outside a bank in Amritsar on Tuesday. Vishal Kumar

People scrambling for space outside bank branches sent the lockdown advisory of social distancing for a toss on Tuesday. They blamed this on reduction in working hours for the public.

Those visiting the banks had to not only stand in long queues, but also go through several checkpoints on their way due to the curfew.

Avneet Kaur, who has a savings account with a nationalised bank outside Guru Nanak Dev University, said: “The norm of social distancing was tough to follow as officials of the bank branch were not allowing customers inside. Without deploying any staff members outside, they expect account holders to make a queue and comply with all norms. It is expecting too much, isn’t it?” she asked.

While some banks made sure that customers maintain social distance while standing in queues, others ignored it totally. Though two cops were deployed outside all banks, they proved helpless in managing the huge rush of customers.

Inderpreet Singh, a senior citizen, standing outside the branch of another bank on GT Road, said there was one queue for all. An employee of a bank comes at the entrance and inquires for the kind of work from a customer standing in front. Then, he goes inside with the documents and after some time returns and hands over the documents to the person concerned. This process is repeated every time. This exercise consumes a lot of time.

Another customer Abhit said the duration for public dealing from 10 am to 2 pm is insufficient. He said he approached the bank for accessing the locker between 2 pm and 4 pm, which was denied. Over a fortnight ago, he had approached the branch during the same time and it was found convenient as a few people were available in the main branch inside the Hall Gate.