Over 3 lakh have been tested so far in state: Soni 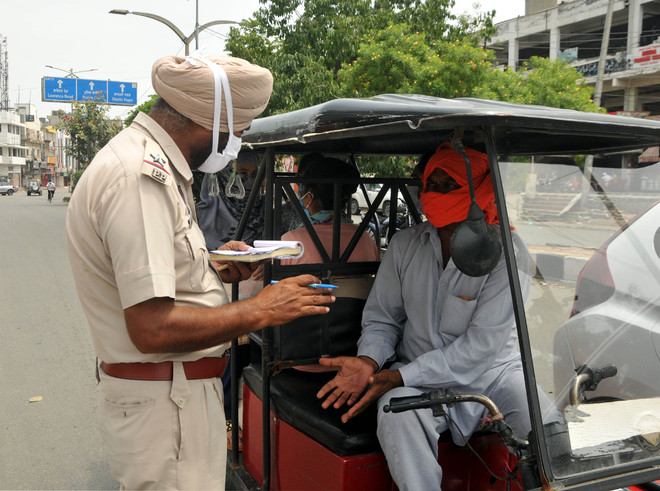 A policeman checks a travel pass of a driver in Amritsar. Vishal kumar

With seven more persons tested positive for Covid-19 during the last 24 hours, the total count of positive cases climbed to 1,003 in the district on Sunday. Of the new cases reported by the district Health Department, five are ILI (influenza-like illness) cases and two patients have a contact history.

The district media bulletin informed that Jhander village near Fatehgarh Churian, Loharka Road, Khairabad Road, Sultanwind and Rose Avenue each reported one ILI case. Besides, one contact of a positive patient from Majitha and one from Aakash Avenue also tested positive.

Meanwhile, Medical Education and Research Minister Om Parkash Soni after a meeting with officials to review the situation stated that vacant posts in Government Medical College would be filled soon. The process of filling vacant posts in all three medical colleges had already begun, he said.

He said the college principal had been delegated the powers to recruit staff through outsourcing. Soni claimed that the Covid-19 situation was under control in the district, but people should continue taking precautions and should not become negligent.

Soni said over 3 lakh people had been tested so far in the state. The minister added that a large number of patients were recovering. Health teams were working tirelessly for the treatment of patients.

After a DSP and his wife tested positive on Saturday, the Health Department has collected samples of his subordinates and contacts. The number of positive cases from among the police force is alarming as 30 cops have tested positive for Covid-19 so far.