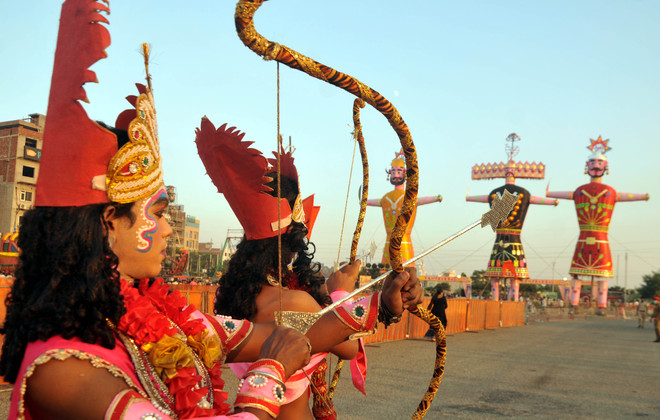 Ravan Dahan marked Dasehra celebrations here today. Hundreds turned out to watch Ravana, Kumbhkaran and Meghnad go up in flames after an year due to the Covid pandemic.

Soni while addressing the gathering at Durgiana Temple said, “Dashera festival reminds all that only good deeds of a person are remembered.” The celebrations at Ranjit Avenue were completely political as former minister and ex-MLA from Amritsar North Anil Joshi, former ministers Bikram Singh Majithia and Daljit Verka were present on the stage.

The highlight of the celebrations was floats/tableaux prepared by Ramleela committees depicting significance of the festival.

Despite restricted celebrations allowed by the administration in wake of the ongoing Covid-19 pandemic, no guidelines were followed at venues as crowds of people were seen without face masks. All venues were overcrowded. This was despite clear instructions that only half of the capacity of venues was to be utilised during Dasehra celebrations. Social distancing too went for a toss as unregulated crowd thronged venues.

Tarn Taran: Dasehra was celebrated in Tarn Taran with great traditional fervour. The bazaars and shops, particularly that of sweets, utensils and fruits, were colourfully decorated. People in large numbers gathered to see the effigies of demon king Ravana, Kumbhkaran and Meghnad go up in flames at the local Dasehra ground on Friday. Tarn Taran MLA Dr Dharambeer Agnihotri, put the effigies on fire. Effigies were also burnt in Patti. OC