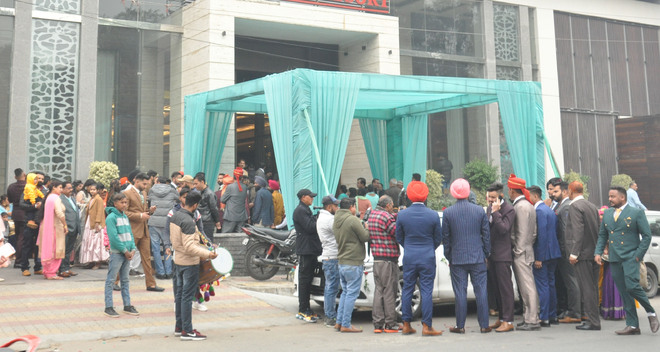 Wedding season began with high expectations for those associated with it directly or indirectly.

A surge in Covid infections in the district and rapid increase in number of positive cases in neighbouring states would impact marriages and traders once again in the region. The marriage season has commenced with high expectations for those associated with it directly or indirectly. However, traders were keenly watching turn of events after the Covid-19’s second wave hit New Delhi.

Earlier, the government had allowed a gathering of 100 people during an event, but this norm was not being followed by masses.

Marriages directly infuse liquidity in various businesses, including clothes, jewellery, beauty and dairy products, besides artists, cooks, florists and electricians, among others. However, people involved in this trade said their earnings would be hit if the Centre and state government impose new set of restrictions at this point.

Piyush Kapoor, who is a manager at a hotel, said there would be untold problems in operating businesses as booking amount for banquets were paid in advance.

He said number of marriages being organised in the city were higher than the last season. “It was due to the lockdown imposed in the wake of the Covid-19. Later, the government capped the number of visitors to 50. The marriage season will last till next month,” he said.

Taking a cue from the rising graph of Covid-19 positive cases and casualties in Delhi, the state government has decided to impose restrictions.

APS Chatha, chief, Amritsar Hotel and Restaurant Association, said, “I am putting up at New Delhi for the last one week and the situation is alarming. It takes around 10 hours to cremate a body at electric crematorium.” He urged the residents and banquet owners to follow the health guidelines issued by the government in order to tackle the pandemic.