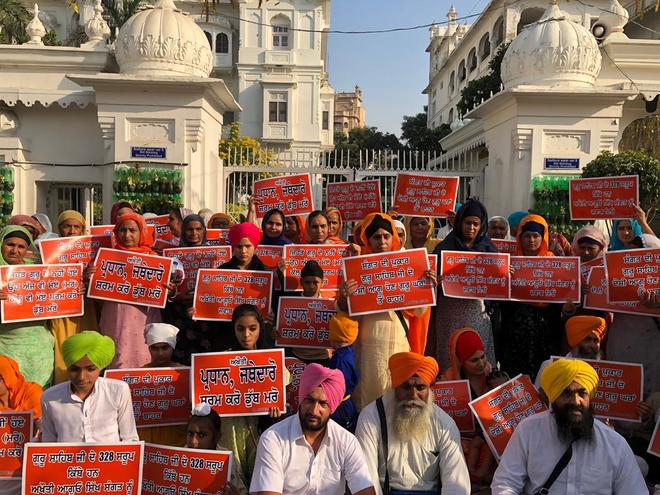 Sikh organisations protest against the SGPC in Amritsar. File photo

The city police today registered a cross-case against SGPC employees in connection with the clash between its task force and Sikh activists protesting over the missing “saroops”.

The police had registered two cases, booking around 60 activists of Sikh organisations, in connection with the clash.

DCP Jagmohan Singh said the cross-case was registered under Sections 323 (voluntarily causing hurt), 341 (wrongful restraint), 148 (rioting) and 149 (unlawful assembly) of the IPC on the complaint of Sikh organisations. Further investigations were on.

Around 30 persons from both sides were injured following an altercation outside the Teja Singh Samundri Hall where Sikh organisations were holding an agitation over missing “saroops”.

Earlier in the day, the Satkar Committee accused the SGPC task force of picking up its members from the dharna site and assaulting them before getting false FIRs registered against them at the behest of its president.

Committee spokesperson Sukhjit Singh Khosa, along with members of the committee and other Sikh organisations, in Fatehgarh Sahib said they had sought an appointment with the DGP to apprise him of the incident and highlight the high-handedness of the SGPC task force in getting false cases registered against them.

He said they would continue to hold protest and seek answers to the missing “saroops”.

Answering a query about a clip being circulated in the social media terming committee members drug addicts, he accused the SGPC of trying to tarnish their image. Khosa offered to undergo a dope test alongside SAD president Sukhbir Singh Badal and SGPC members and said in case he tested positive, he would self-immolate.