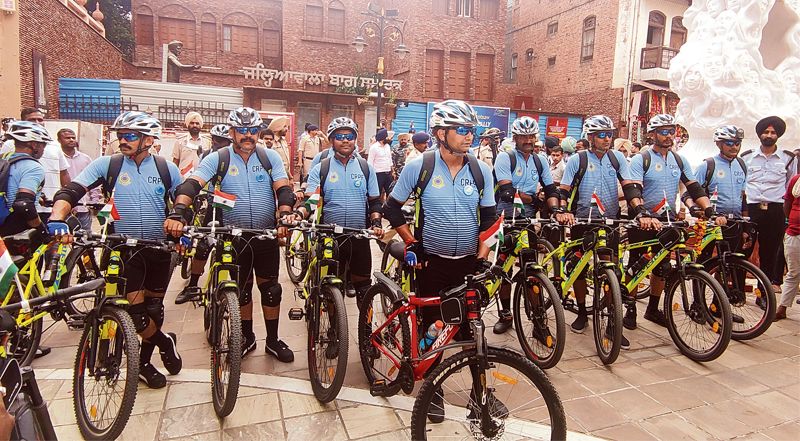 CRPF jawans after paying homage at the Jallianwala Bagh in Amritsar on Friday. Vishal Kumar

In order to mark the 75th Independence Day, a cycle rally, under the ‘Azadi Ka Amrit Mahotsav’, has been organised by the Central Reserve Police Force (CRPF). It commenced from Jammu and Kashmir and will culminate in Delhi.

It reached Amritsar today and the participants – CRPF Jawans — were welcomed by CRPF officials, including IG CRPF Moolchand Pawar and DIG Bhanu Partap. They paid homage at the Jallianwala Bagh where Deputy Commissioner of Police Parminder Singh Bhandal welcomed them. He also honoured the participants.

CRPF officials, while speaking on the occasion, said, the rally was organised from four corners of the country. He said the rally, which started from J&K, would end at Raj Ghat in New Delhi on October 2.

It is evident to mention here that the Union Home Ministry had decided to celebrate the year 2021 as ‘Azadi Ka Amrit Mahotsav’, aiming at making people aware of sacrifices made by the freedom fighters to attain the freedom.

DIG CRPF Harjinder Singh said the CRPF organised cycle rallies from different parts of the country from Wednesday. This rally passed through Pathankot, Gurdaspur and Batala before reaching Amritsar. After paying homage at Jallianwala Bagh, it would continue its journey and would visit Jang-E- Azadi, Kartarpur, Group Kendre at Jalandhar and Ludhiana, Shaheed Udham Singh Smarak at Sarhind (Fatehgarh Sahib), Ambala, Kurukshetra, Sonepat, Gurugram and would end at Raj Ghat at New Delhi. The CRPF jawans also paid obeisance at the Golden Temple.