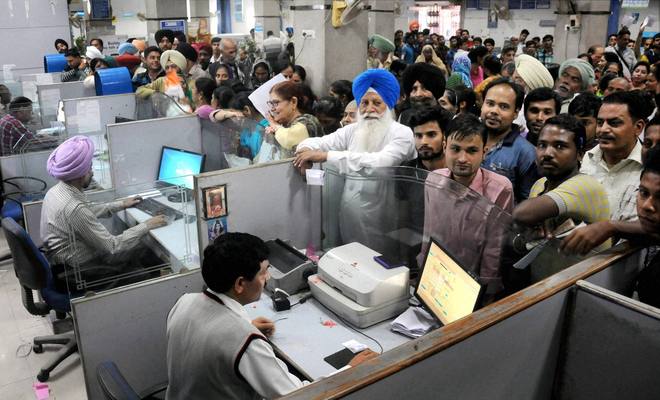 Bank veterans and customers in the city have complained of several disruptions and hiccups faced by them due to the merger of various banks. They complained that the promise of convenient banking solutions following the merger has evaporated and they are facing new difficulties every second day.

Harpreet Singh, an account holder with one such a bank, which was merged into another nationalised bank, said, he always finds the passbook printing kiosk down. Most of the time, the staff blames it on poor connectivity. “They do not even get up from their seats to address our problems. It is not an observation developed through an instance but many of my friends from different shops of Katra Sher Singh have also claimed so. On being requested for help, they cite the reason of shortage of staff.”

Talking about ‘May I help desk’ window to facilitate banking needs of customers, Amarjit Singh said, “Either the window is missing or the designated staff has not been assigned. It should have been made functional on a priority basis especially after the merger as customers are in dire need to know the latest updates.”

Customers of the merged banks are referred to the base bank even for cash deposit and clearing instruments. In some instances, even ATM services continue to be hit, citing flimsy grounds, such as discontinuation of outsourcing.

He said in this scenario they do not have any other alternative but to shift to private banks due to deterioration in services.

The Narendra Modi-led government in its first tenure had set the ball rolling for consolidation and amalgamation exercise in public sector banking with merger of SBI with five of its associate subsidiaries along with the Bhartiya Mahila Bank in 2017. In its second term, the government continued the process with a mega merger of 10 PSBs into four entities in 2020 bringing the number of state run banks to 12, which were 27 in number three years ago.

Suresh Sarpal, a shopkeeper, stated that “We are close to the first anniversary of mega merger yet software upgradation is playing truant as whenever they approach local branches they attribute it to the same.” Even the basic banking services are hampered due to the continued upgradation process on core banking solutions. Customers cannot avail hassle-free services at the merged entity, causing harassment and inconvenience to the public at large.

Munish Arora, a wholesale trader, said except the installation of new glow sign boards, nothing tangible has been achieved with mergers and amalgamation of banks. Neither the economy witnessed any growth nor banks are on the road to recovery from bad loans, ordinary customers like him feel harassed even during a visit to any branch of a bank with fewer staff.

Anil Vinayak, a retired Senior Manager from the Oriental Bank of Commerce, said, banking reforms were the need of the hour amid burgeoning NPA portfolio, spike in banking frauds and shrinking credit growth.