The stretch, lined with potholes, is a source of misery for many; requires urgent mending 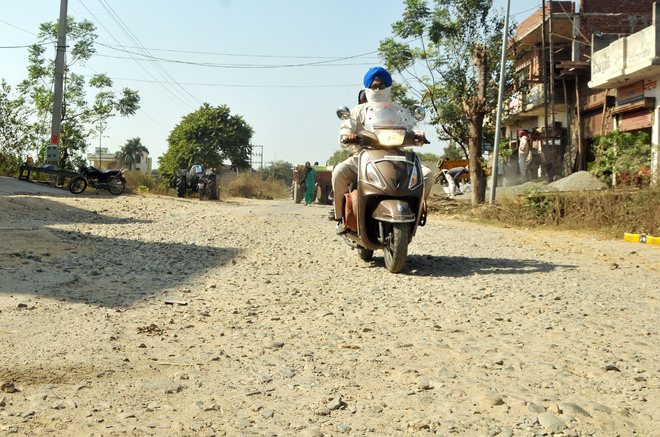 The link road between Sultanwind and Daburji is left to the mercy of god. Photo Vishal Kumar

The link road between Sultanwind village and Daburji is left to the mercy of god. The government had installed sewerage lines around two years back. Then, a thin layer of gravel was laid to level it but during the last monsoons the flimsy side was exposed as it had caved in at various spots.

The stretch from ‘Lakhe De Plot’ to GT road Daburji has a massive problem of potholes. It requires urgent care. Several mishaps involving two-wheelers and bicycles, especially during monsoons, have taken place as these fissures are not visible when the road gets waterlogged. Moreover, there is a pothole; which is no less than a crater, near Ajay International Palace which takes several weeks to dry up.

“It makes driving very uncomfortable. Many times we brought these problems to the notice of local politicians, but to no avail. The dust further complicates it. The administration should mend the road,” said Davinder Singh, a resident of Sultanwind.

The total stretch is around three and a half kilometers from Daburji bridge to old police chowki. The residents and nearby localities often take this route as a short cut to go to Jalandhar and Pathankot bypass. A large number of commercial establishments are also established here. All are partakers of the mess.

Residents said they were hopeful that the government would listen to their demand. Narinder, a workshop owner, said, “Our business is suffering due to the poor condition of road. The government did not re-carpet the road for several years. After installation of sewerage lines the condition got more pathetic and the footfall of visitors is quite low.”

Satnam Singh Satta, councilor Ward No. 34, said, “We were aware that the road would be damaged in the monsoon. So, it was covered with a thin layer of gravel. Now, we are trying to re-carpet it with appropriate material. MLA Inderbir Singh Bolaria assured that it would be layered with standard material and estimate would be submitted soon.”