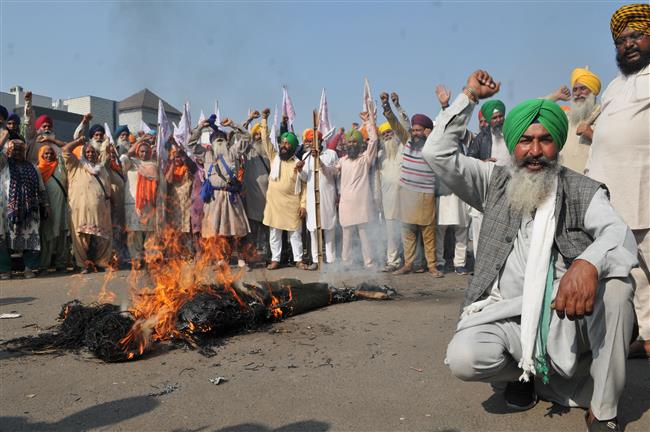 Farmers raise slogans and burn an effigy of the government in Amritsar on Tuesday. Photo: Vishal Kumar

On the fourth day of the ongoing protest outside the Deputy Commissioner’s office, farmers associated with the Kisan Mazdoor Sangharsh Committee burnt effigies of the Centre and state governments here on Tuesday.

Farmer leaders reiterated that the protest would continue till their demands were accepted. KMSC general secretary Sarwan Singh Pandher said the state government was trying to displace thousands of farmers by converting village common lands into panchayat lands.

Pandher also demanded from the Centre to decrease the prices of diesel and petrol as the prices have gone down in the international market. The protesting farmers are camping outside the Deputy Commissioner’s office here for the last four days. The protest being led by the KMSC is witnessing huge participation of farmers, including women.

Farmer leaders stated that they were fully prepared for a long fight. “It is for the government to decide. If we can successfully hold protests at Delhi borders for over a year, we can do the same here,” said association leader Gurbachan Singh Chabba.

The agitators are demanding legal guarantee for minimum support price (MSP), MSP for vegetable and milk, compensation and job for families of farmers who had died during the agitation at Delhi borders, increase of wages under MGNREGA, extension of work days under MGNREGA, Clinical Establishments Act to keep check on fee charged by private hospitals, punishment for desecration of religious books and other issues.