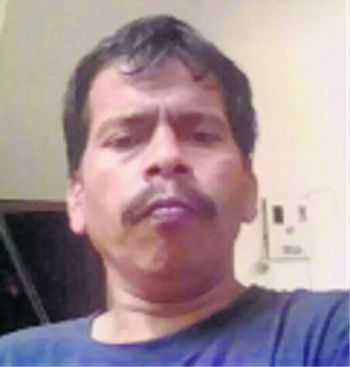 Ramesh Singh, a resident of Uttarakhand, working as a waiter in a hotel, was killed allegedly by two unidentified robbers here on late Monday night.

A day after a waiter’s murder by unidentified robbers in the Jagdambe Colony area, the police have started scrutinising the footage of CCTV cameras installed near the spot for finding clues to identify the suspects.

Gurbinder Singh, SHO, Sadar police station, said the accused would be arrested soon as the police got some clues and they were working on it.

Ramesh Singh (in pic), a resident of Uttarakhand, working as a waiter in a hotel, was killed allegedly by two unidentified robbers here on late Monday night. He was returning to his rented accommodation in Jagdambe Colony when the incident took place. The accused decamped with his jacket and cash.

The family members of the victim on Tuesday held a demonstration outside the Sadar police station protesting against police failure to take action against miscreants robbing waiters coming late in the evenings. They said the police had miserably failed to curb rising incidents of snatchings and robberies.

The SHO said night patrolling had been increased and nakas were being set up to check snatching incidents.