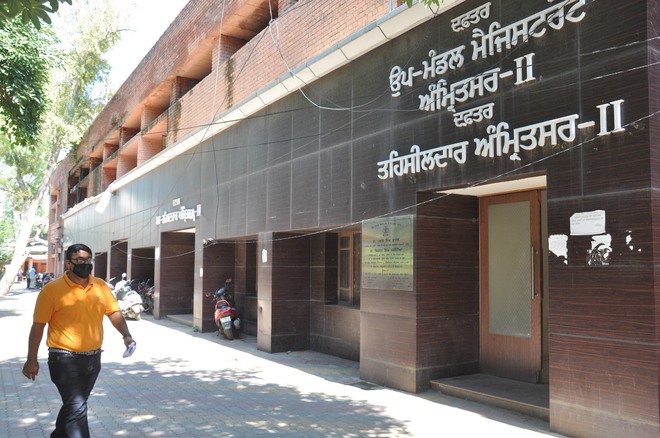 On the call of the Punjab State DC Office Employees Association, employees of the DC office here began a 10-day pen-down strike on Thursday. The protest hampered the work at the DC office and judicial work at the SDM-I and SDM-II offices.

Over 250 employees of the DC office are protesting against the Punjab government for “back tracking on their promises and side-lining them repeatedly”.

“In the past four years, we held several strikes and were each time given an assurance by officials that our demands would be looked into. After a few months, everything is forgotten. This time, through a statewide protest, we want to remind the government of its failure,” said Arvinder Sandhu, president, DC Office Employees Union, Amritsar,

Their demands included release of DA arrears pending since 2017, pay revision under the new pay commission and pension to retired employees. “We have been working tirelessly throughout the lockdown, going beyond our duty to help people during the pandemic. Despite our hard work and commitment, we have not been appreciated. To top it all, we have recently been informed that our mobile allowance has been cut to half. If the MLAs and MPs are being given pension after five years of service, why are we being left out, despite serving for three or four decades with the government,” said Arvinder.

While employees will continue strike till August 14, they will raise black flags and mark August 15 as ‘black day’.

No award ceremony this Independence Day

The Deputy Commissioner has announced that no Independence Day award ceremony would be held this year due to Covid-19. The children’s cultural programme has also been cancelled. “Every year, the Independence Day ceremony is marked by presenting awards to various government officials and citizen achievers for their contribution and achievements. But this year, we will follow the government guidelines while granting permission to people to attend the ceremony. We will issue a card for entry to only limited persons,” said DC Gurpreet Singh Khaira.

Addressing his first meeting with the officials on preparations for the event, the DC directed them to ensure adherence to Covid-19 safety guidelines. This year, Cabinet Minister OP Soni will be the chief guest at the ceremony which is to be held at Guru Nanak Stadium.