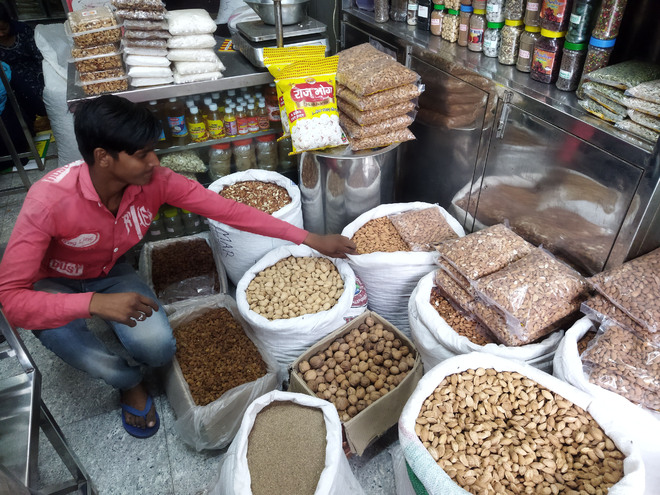 Most of the traders in Majith Mandi, a hub of dry fruits and spices in Amritsar, are involved in trade with Kabul.

Even though no fund transfer is taking place through the Bank of Kabul, a few importers, who have been into the trade for decades, are getting supplies of dry fruits from Afghanistan on credit due to their connections.

The trade between the holy city and Afghanistan goes back to centuries. Most of the business houses in Majith Mandi, which is a hub of dry fruits and spices in the walled city, are involved in this trade.

Anil Mehra, a city-based importer, said: “The entire business is taking place on credit now. No new import house is getting supplies as the employees of the Bank of Kabul have not joined duties after the change of guard.”

Instead of covering costly eatables with tarpaulin sheets, some buckets were placed under the leaking roofs. Obviously, these are not adequate to prevent the seeping rainwater from reaching the bags. The authorities at ICP failed to protect the costly eatables from rainwater.

Meanwhile, importers are busy assessing losses incurred after the imported Afghan dry fruit got drenched in the downpour from leaking roofs recently while being stored in warehouses at the Integrated Check Post (ICP), Attari-Wagah, 36 km from here. He said assessing the total loss would be an onerous task as the stored material was despatched to different parts of the country. He, however, made it clear that they would not get good returns on drenched imported eatables. He said: “Proper care is not being taken despite paying heavy maintenance and demurrage (charges).”

Importers pay nearly Rs22,000 per truck as maintenance charges on the very first day, when the material is unloaded in godowns. In addition, Rs4 per tonne demurrage is given for the next two to three days. This is raised to Rs50 per tonne for the next five days and then it is increased to Rs150 per tonne.

Importers said instead of covering costly eatables with tarpaulin sheets, some buckets were placed under the leaking roofs. Obviously, these were not adequate to prevent the seeping rainwater from reaching the bags. They are irked at the authorities at the Integrated Check Post (ICP) for failing to protect the costly eatables from rainwater.

Though no official of the Land Ports Authority of India (LPAI) came forward to clarify, sources said holes were made in the godown roofs to install solar panels. Work for the same is under way. However, the rainwater managed to make its way inside the godowns through these holes.

BK Bajaj, a city-based dry fruit importer, said: “Though the Bank of Kabul is lying closed for want of staff, the Afghan exporters are dispatching material in good faith and on credit to clear their stock of freshly harvested crop. So, over 30 trucks are arriving at the ICP daily.”

Recently, his counterparts in Afghanistan conveyed to him to pay for the imported material through third country. Most of the Afghan exporters have chosen the UAE for payments.