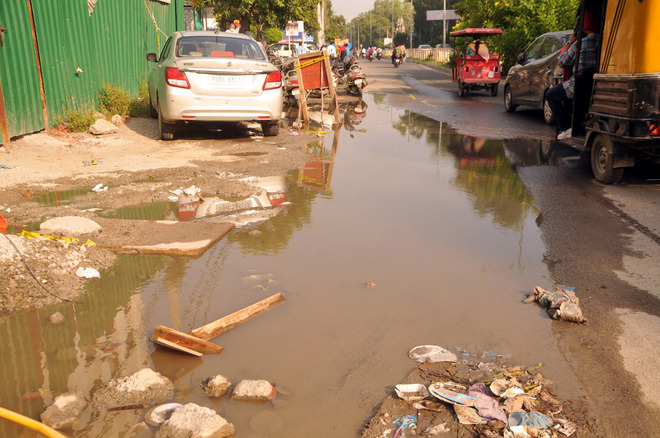 Water accumulates on the GT Road due to a blocked sewerage at Mall Road in Amritsar. Tribune photo

Despite MC’s repeated claims of making the city streets clean through new mechanical cleaners and attempt to unclog the waste disposal system by revamping sewerage lines in several areas, residential colonies in Amritsar West, including Preet Vihar, Bhalla Colony and several other near Polytechnic college are witnessing dilapidated sanitation and garbage disposal conditions. Over the past few days have seen peak in dengue cases in city, almost to the brink of an outbreak, but the MC seems to be struggling for providing a quick and long-lasting solution to the problems.

Receding monsoon had resulted in clogging of sewerage, flooding of streets by the sewage water and piles of garbage could be seen be seen stuck inside potholes at several residential colonies. Even after days and change in weather, the collapsed sewerage system and garbage disposal system seems to bother residents of these colonies, who are already concerned due to dengue.

“The sewerage system in some of the these areas have been laid decades ago, with only superficial repairs and unclogging attempts being made by MC on several occasions. Stagnant water and choked sewerage is not just a monsoon-problem, but a year-round issue. At times, we have complained to authorities about sewerage water mixing with water supply,” said Bhupinder Singh, a resident of Bhalla Colony.

Even the residential colonies near the IIM campus and Polytechnic College often complain about water logging and garbage dumped on roadsides. “The street along the Polytechnic road was laid a few years back to create a clean, sidewalk for the locals. But the sidewalk has now become a dumping ground for garbage and even the green stretch along the IIM campus and CIPET campus is a dumping ground. With dengue cases on such a rise in city, such lapses can prove to be hazardous for residents’ health,” said Deepak Sharma, a resident of Dashmesh Avenue.