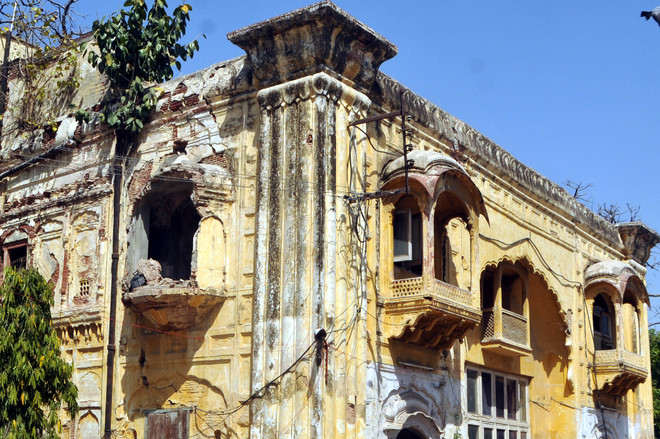 A view of heritage structure of Service Club at Rambagh garden in Amritsar. Photo: Vishal Kumar

The historical structure known as Deorhi in the summer palace of legendary Sikh ruler Maharaja Ranjit Singh, also known as Ram Bagh, is crying for attention.

One of the projecting balconies decorated with ornamental floral designs in the lime plast has fallen, while cracks have appeared from different sides in the structure.

The Deorhi was handed over to the Municipal Corporation by the British era ‘Service Club’ over a year ago.

According to sources in the Archaeological Survey of India (ASI), the structure remained in the occupation of the club for nearly a century. Therefore, it could not be preserved. Sources said the said structure was a replica of ‘Deori Ram Bagh’ — one of the main entrance gates to the Summer Palace, which is conserved and currently under the occupation of the ASI, which runs its office from its premises.

As per the ASI, the Deorhi (under its occupation) comprised fortified citadel having the Darbal Hall, two pavilions on the eastern and western sides, two gateways on the northern and southern sides. Besides the façade contains beautiful balconies.

As far as the Deorhi (vacated by the Service Club) is concerned, its façade needed urgent repair, said sources in the ASI. They pointed out that a balcony has caved in, while cracks have appeared on different sides.

An ASI official pointed out that the process of repair and conservation of the outer façade has already been approved and the department was in the process of floating tenders for the same. The entire process, which got delayed to the pandemic in the previous year, is likely to be completed by July this year. After this, they would again request the MC authorities to hand over the structure to them.

Vijay Kumar, a frequent visitor to the historic garden, said it was very ‘painful’ to see the approach of different agencies towards theses heritage structures of immense importance. The government should conserve these structures on a priority, as it could add to most prominent tourist destination for tourists visiting the holy city.

The ASI has written a number of times to the civic authorities for handing over the protected monument.

At present, three British-era clubs — Service Club, Lumsden Club and Amritsar Club — are being run from the premises.

Besides, food kiosks, concrete pathways, children’s park, skating rink, tennis courts and zonal offices of the Municipal Corporation have been playing a spoilsport as far as the historic Bagh’s heritage significance is concerned.

The ASI and the Municipal Corporation have entered into an agreement, where the latter would remain the custodian of the garden, but the restoration of the heritage would be done under the ASI.