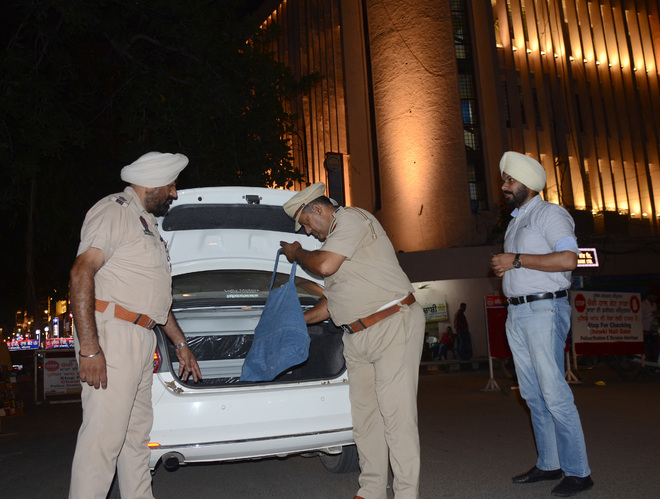 Cops inspect boot of a car at the Hall Gate in Amritsar on Friday.

Even as there is a high alert in the state in the wake of terror module busted by the Amritsar (rural) police, three firing incidents have been reported in the last two days in the city.

An unknown person shot at Ranjodh Singh, a resident of Ranjit Avenue, on September 16. The incident occurred outside a bakery where he had gone to purchase a birthday cake. The police have booked an unkown person on charges of murder bid and the Arms Act. The victim has been undergoing treatment at a private hospital.

Shamsher Singh, father of the victim, told the police that Ranjodh’s birthday was on September 16. He said Ranjodh had gone to the bakery in Ranjit Avenue and as he reached near his destination, a bullet hit his waist and blood started oozing out.

The police said as per initial probe, two youths were quarrelling near the spot. Cops said after firing, they fled away from the spot. Later, the victim was admitted to the hospital, where he went under surgery and his condition was stated to be out of danger.

The police said investigation was under progress to identify the suspects and motive behind the incident.

In another incident, Sahilpreet Singh, sustained a bullet injury in the area falling under jurisdiction of Division B police station three days ago.

The vicitm told the police that on September 14 around 10.30 pm, he was going to his customer’s house near Ghuman Dairy. He said he found heavy rush near the dairy where two groups were fighting. He said suddenly firing started and a bullet hit his left shoulder. Both the groups fled away and he was admitted to a hospital.

The Division B police have registered a case of murder bid and the Arms Act against unknown persons and further investigation was under way to identify the suspects.

Another incident of quarrel and firing was reported in Azad Nagar falling under the jurisdiction of Chheharta police station. Though the incident occurred on September 13, an FIR was registered on September 16 after recording the statement of the victim, Ankush Sharma, a resident of Subhash Road in Chheharta.

The Investigating Officer said they got information about firing between two groups. When the police teams reached at the spot, they found an injured person who was admitted to the Civil Hospital. Probe revealed that there was a quarrel between Ankush and the accused.

An FIR has been registered in this regard.

Police Commissioner Vikram Jeet Duggal on Friday found lapses at 20% nakas and sought explanations from cops. Duggal used a private vehicle to check the nakas set up at 80 points in the city. “I found lapses, including lesser strength at 20 per cent of checkpoints and called for an explanation from the duty officers,” he said and added that punitive action will also be taken if their reply is not found satisfactory. Force will remain on roads after 5.30 pm and ensure strict checking of vehicles.