A dam is being constructed in interior part of Beas 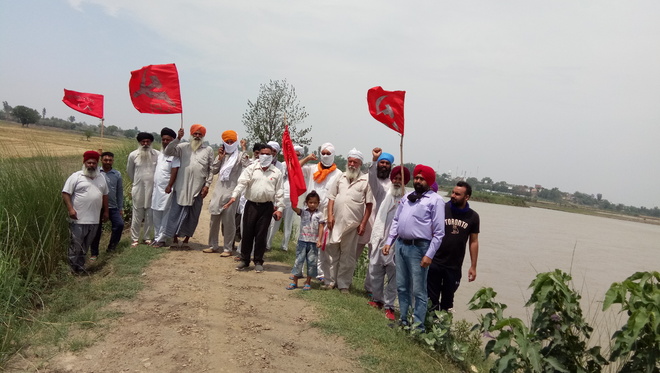 Farmers of Dhunda village protest against building a dam on the Beas near the village. Gurbaxpuri

The Dhunda village farmers’ protest against erecting of dam in the interior portion of Beas river entered eighth day on Thursday.

Rohit Gupta, SDM Khadoor Sahib, said the state government had released a grant of more than Rs1 crore for the dam to save their produce from inundating every year. He said the administration after conducting its survey by the Drainage Department had introduced the project. He said the dam was under construction.

A deputation of the CPI led by leaders Prithipal Singh Marimegha and Devinder Sohal visited the spot today and said the under construction dam was a political movement to save the interests of few families likely to be their supporters by ignoring interests of majority of the farmers. The CPI leaders, with reference of farmers of the area Baldev Singh Dhunda, Harbans Singh Waring, Nirvel Singh, Harjinder Singh Panchayat member Dhunda, Gurmej Singh Subedar, Amarjit Singh, Gurdial Singh Nambardar Dhunda, Gurmej Singh, Sukhdev Singh, Rachpal Singh, Surjit Singh Maninder Singh, Gujjar Singh, etc refuted the claim saying that the dam must save the land and the crops of all the farmers. The agitators said the dam would divert the river’s flow from their 2,000-acre land which destroys their crops after every six months.

CPI leader and the farmers demanded for the permanent solution of the problem by constructing a parallel canal in the interior portion to save their land and the crops.