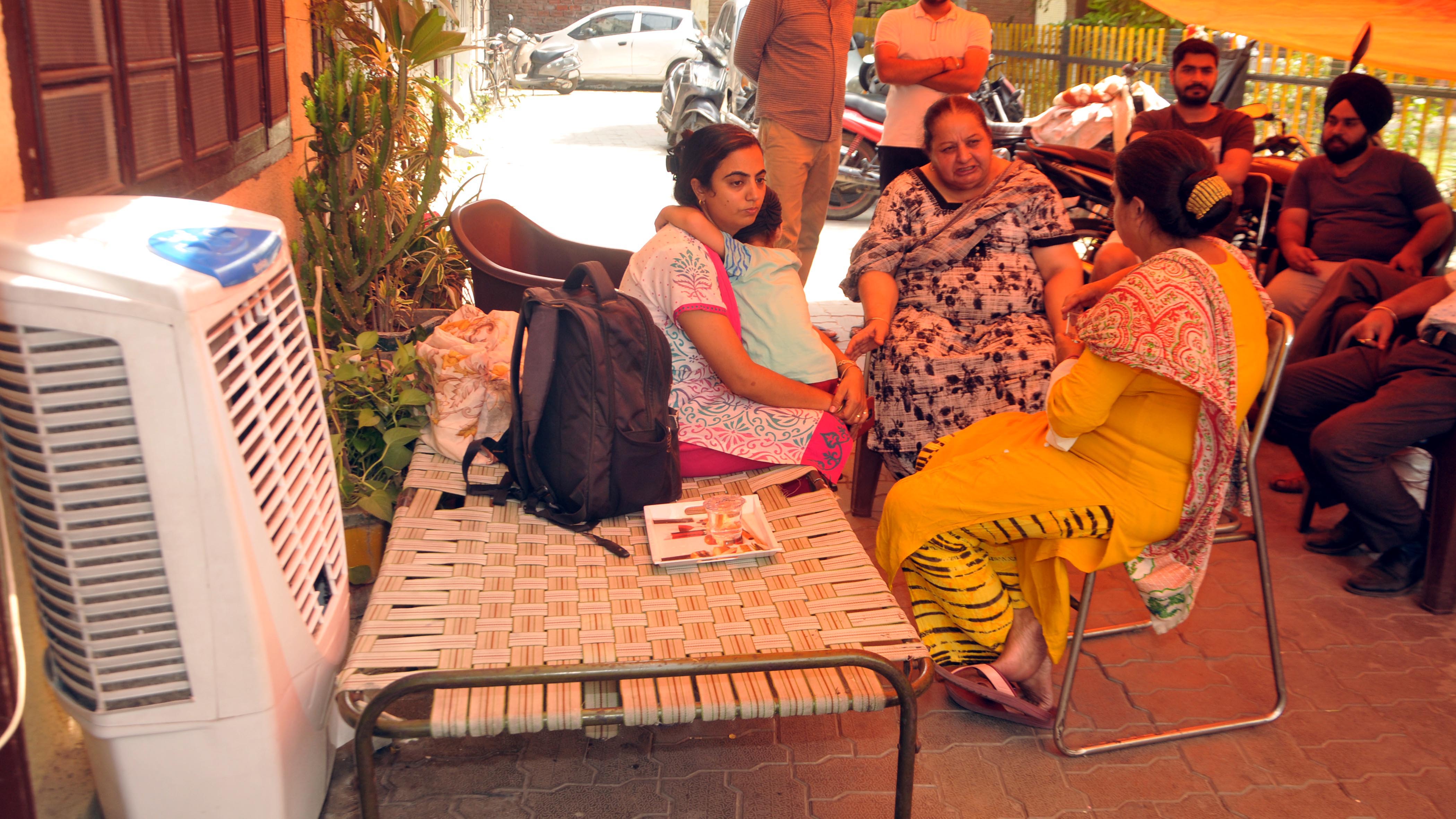 Residents whose houses were damaged camp outside their homes on Railway Road in Amritsar. Photo: Vishal Kumar

Six days after the incident, Mayor Karamjit Singh Rintu finally visited the houses affected due to the digging of a new hotel at Railway Road, here on Wednesday.

A high drama prevailed amid arguments between the affected hotel proprietors and Mayor Karamjit Singh Rintu.

On Wednesday, former Congress leader Mandeep Singh Manna visited the families camping in the street outside after major cracks developed in their homes. The affected families claimed that the cracks were getting wider day by day and that they were sitting at a high risk.

“We have been raising the issue for the last two years, but to no avail. Now, we are in trouble and no action has been taken against violators. We demand compensation to rebuild our homes,” said a woman, who was seen camping outside her damaged house.

Manna called the Mayor and asked to visit the spot and listen to the grievances of the victims. “These eight families are sitting on the road under high risk as the cracks are getting wider day by day. Ironically, no one from the disaster management, district administration and Municipal Corporation visited the spot. The MC is responsible for not keeping a check on the violation of norms. Despite repeated complaints against the violation by the under-construction hotel, no action was taken. There seems a nexus between the builders and the MC. I told the owner of the under-construction hotel that he can’t resume construction without reconstruction of their houses,” said Mandeep Singh Manna.

Meanwhile, the committee formed on the case has not filed a report yet. The victims raised objections over members of the committee. The committee was reportedly recording the statements of parties concerned and stakeholders.

Manna asked the owner of the under-constriction hotel to compensate the affected house owners else he would fight on legal grounds against him.

The Mayor claimed that he was also concerned about the families sitting in the open in hot weather. They were working on various options to compensate the victims. The Mayor instructed the Municipal Town Planning wing officials to collect the goods of the house owner from the debris and return them. Moreover, support would be provided to the walls of the damaged houses.

While, Sanjay Kumar, owner of Grand Hotel said: “I have been fighting against these violations since August 2021. As per law, the owner of the under-construction hotel should leave a 6-metre setback area (distance between two walls) but he didn’t leave even 3 feet. This led to the destruction. With the connivance of officials of the department concerned, the building owner also dug 60 feet of the earth. He didn’t stop the work even after getting the stay orders from the High Court. The vibration caused by the machines, working in the basement, was the immediate cause for the collapse of my hotel. No one is showing concern for the destruction to my property.”

Though the owner of the under-construction hotel claimed that he didn’t dig the basement more than the approved plan, Sanjay Kumar, owner of the Grand Hotel, claimed it was more than 60 feet. Similarly, the setback area should be around 20 feet but it is less than 4 feet in most of the area. “More than 60 feet digging along with the walls is a gross violation of norms. It could have been a major tragedy,” the Mayor said.

The affected families raised objections over the approval of the building plan in the residential area. Victims claimed that the builder must have manipulated the documents to get approval for the plan. There should be an inquiry to check the documents submitted to the government to get approval for the plan. However, Mayor Karamjit Singh Rintu instructed the MC officials to revoke the building plan until further orders.

It is a major destruction. Around seven houses were badly affected. The owner of the under-construction hotel approved the building plan under the "Invest Punjab" project of the state government. He didn't follow the norms and gross violations were reported while digging the basement. The inquiry marked by the DC is on. We will not exempt anyone. — Karamjit Singh Rintu, Mayor