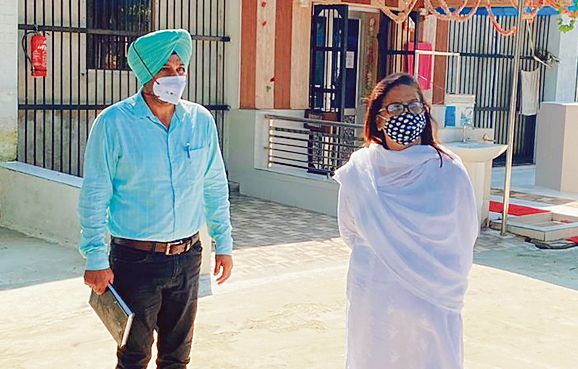 District and Sessions Judge-cum chairperson, District Legal Services Authority, Priya Sood visited Sub-Jail Patti on Tuesday and inspected the conditions of the civic amenities being given to the inmates.

Tarn Taran: District and Sessions Judge-cum chairperson, District Legal Services Authority, Priya Sood visited Sub-Jail Patti on Tuesday and inspected the conditions of the civic amenities being given to the inmates. Interacting with the inmates, she apprised them of their rights. She also visited the barracks and inspected the sanitary conditions and the standard of food given to inmates. The judge also instructed officials to provide proper medical facilities, including sanitised barracks. The judge advised inmates to read books. OC

Amritsar: The district Health Department has announced to start training of workers associated with all kinds of food businesses to apprise them of the food safety norms from September 16. District health officer Dr Bharti Dhawan said the trainings are a part of the ‘Eat Right Smart City’ project, so that residents get quality food. She said hotels, restaurants, dhabas would be covered under the project. She said the general public, too, must be aware of the food safety norms, so that they buy food which is safe for their health. TNS

Amritsar: The Golden Temple authorities today handed over two youths to the police for allegedly stalking a girl who had come to pay obeisance at Darbar Sahib. In a statement issued here today, Gurinder Singh, manager, Golden Temple, said a complaint has been lodged with the police in this regard. He told that when employees observed the suspicious act of the accused and tried to enquire, they were attacked by the duo with sharp weapon. He urged the Galliara police authorities to take appropriate action against the duo. TNS