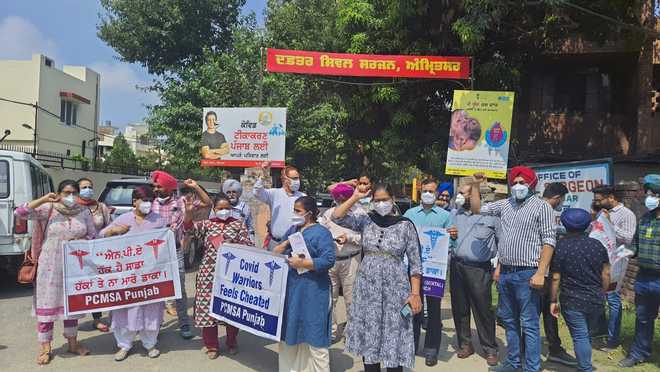 With the Punjab Civil Medical Services (PCMS) Association already on indefinite strike against the 6th Pay Commission, faculty at medical and dental colleges too have announced to boycott services for three-hour daily from July 23.

With the Punjab Civil Medical Services (PCMS) Association already on indefinite strike against the 6th Pay Commission, faculty at medical and dental colleges too have announced to boycott services for three-hour daily from July 23.

As per the announcement made by the association, the services would be boycotted from 8am to 11am daily. Apart from the OPD and operation theatre services, the protest would also impact medico-legal cases.

The faculty at medical and dental colleges had earlier resumed services for the patients even as it had continued with the symbolic protest after assurance from the high-powered committee constituted by the state government. The association would again be meeting Chief Secretary on Thursday to discuss the demands.

The association has already initiated full day indefinite protest. Dr Madan Mohan, district president, PCMS Association, said, “The association has given a call for state-level protest at Chandigarh on July 23.” He said the protest would continue till their demands are accepted. The doctors also staged a protest outside the Civil Surgeon office today demanding that the NPA should be restored at the previous level and it should not be delinked from the basic salary.

The protest by the medical practitioners is affecting the poor patients as they have to visit private clinics for treatment. A resident said, “Most of the visitors at government facilities are poor people who cannot afford treatment at private hospitals. With the doctors at government hospitals on protest, the patients are solely dependent on private doctors.” He said that the government must find a solution to the problem at the earliest.