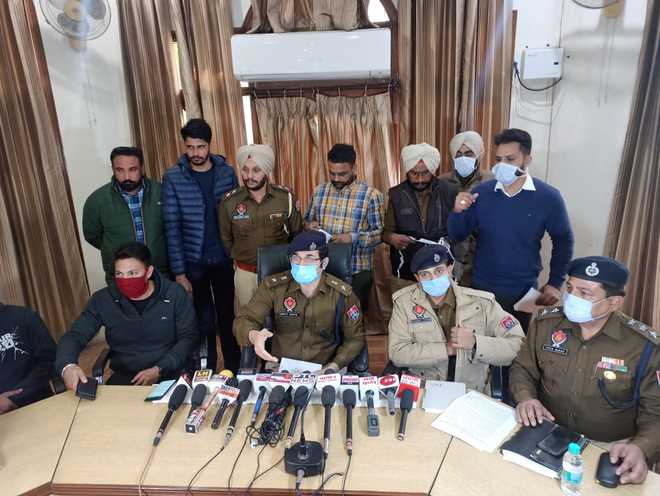 Amritsar (rural) SSP along with other police officials address mediapersons in Amritsar on Sunday.

With his arrest, the police busted a drug module running by Malkit Singh lodged in Faridkot jail.

While addressing mediapersons, the Amritsar rural police revealed that there was a specific input that Himmat Singh, along with Nanak Singh of Vaniyeke village and some unknown persons, had formed a gang and was indulging in smuggling of drugs from Pakistan through the Indo-Pak border. The informer said they had smuggled a huge quantity of heroin and hidden it in sugarcane fields at Panjgariya village.

They said a raid was conducted immediately and Himmat Singh was arrested. According to the police, he confessed before the police about the heroin smuggled from Pakistan. On his information, the police seized 3 kg of heroin hidden in sugarcane fields.

During interrogation, he revealed that the entire network was being run by Malkit Singh, alias Fauji of Muhawa village. He was currently lodged in Faridkot jail under the Official Secret Act and the NDPS Act. Immediately, Faridkot jail authorities were informed who confiscated a mobile phone from his possession.

Fauji has connections with Pakistan-based smugglers and used to run the drug cartel from the jail through phone. On his orders, drugs consignments were slipped into the Indian side. Himmat Singh told the police that the Pakistan-based smugglers had put the contraband in soft drink bottles and smuggled the same into India with the flow of Ravi waters. They chose the area from where the river turned and crossed the border.

The police said while raids were on to nab Nanak Singh, Malkit Singh would be brought on production warrant for further interrogation in the case. They said all the forward and backward linkages of the drug cartel were being ascertained.

Property of a smuggler, his wife freezed Tthe rural police have freezed the property of a smuggler, Sarwan Singh (R), and his wife Narinderpal Kaur of Dhulka village falling under the Jandiala police station here. The police said 300 gram of heroin was seized from Sarwan Singh in 2007. In a statement issued here on Monday, they informed that a Rayya-based residential house worth Rs 25.9 lakh had been freezed by the competent authority.