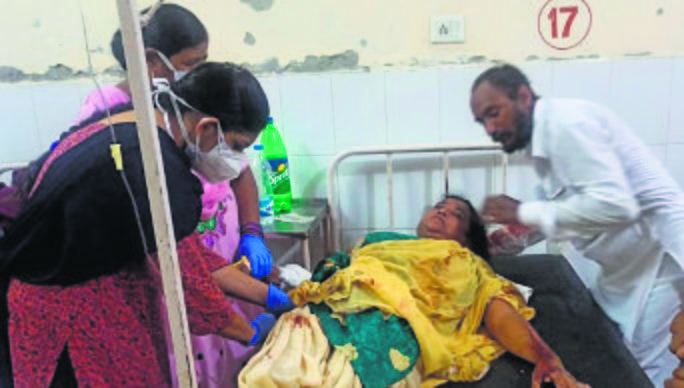 The injured woman at the Civil Hospital in Patti. Tribune photo

A woman was seriously injured after a policeman, allegedly drunk, ran his car over a woman in Patti town on Saturday. The woman has been admitted to the Patti Civil Hospital, where her condition is stated to be serious.

The victim has been identified as Raman Kaur of Verka (Amritsar), who along with her husband Manjit Singh had come to Patti to take medicine from a private hospital. As she was on her way to the hospital, the car driven by a policeman hit the woman and she received arm and stomach injuries. Two policemen sitting in the car, including driver, have been identified as Gurwinder Singh and Amrik Singh posted in Tarn Taran.

The policemen were allegedly under the influence of liquor and dragged the victim 100 metres from the accident site.

SSP Dhruman H Nimbale said a case under Section 279 of the IPC and others relevant sections had been registered against the accused policemen and further action would be taken after receiving the medical report.

The residents, including the victim and her husband, have demanded action against the policeman responsible for the accident. A video of the incident has gone viral on social media.