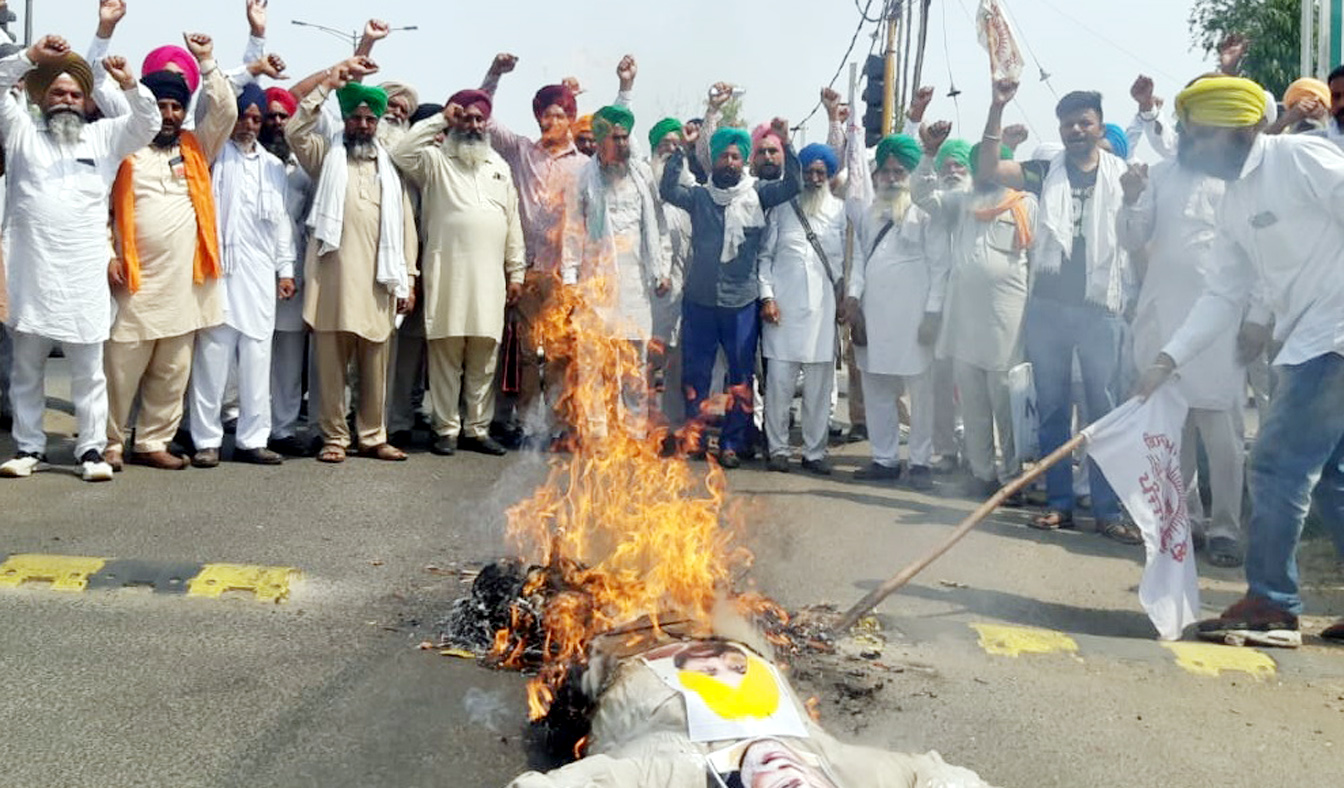 A group of farmers burns an effigy of the Centre and the state government during a protest in Amritsar on Friday. Vishal Kumar

Leaders of the Kisan Mazdoor Sangharsh Committee, Punjab, opposed the condition of registration on web portal to get Rs 1,500 for direct sowing of paddy here on Friday. The leaders claimed that most of the farmers are illiterate and not tech-savvy to get themselves registered on the web portal. They have to face major inconvenience to get Rs 1,500 from the government.

Sarwan Singh Pandher, state general secretary of the committee, said, “The government should adopt some easy mechanism to award Rs 1,500 to those farmers who adopted the DSR technique. We oppose the move of the government and they have to withdraw the condition of registration on portal.”

The KMSC conducted a meeting with the Chief Engineer, Border Zone, Punjab State Power Corporation Limited (PSPCL), for their demands to provide uninterrupted power supply during the paddy season. The union had given a call to demonstrate against PSPCL on May 30. PSPCL officials assured them of fulfilling their demands.

Earlier, on the call of the committee, a large number of farmers gathered outside the PSPCL Border Zone office and burn an effigy of the union and the state government for ignoring their demands and anti-farmer policies. The farmers alleged that Bhagwant Mann-led government had assured them of providing the minimum support price (MSP) on moong dal, but there was no buyer in the grain markets to buy the pulse.

Pandher said, “We have given a call to demonstrate against PSPCL on May 30 regarding their demands related to power. The Chief Engineer today assured them of fulfilling the demands.”

“The moong crop has arrived in the mandis, but the procurement by the government has not started yet. The Bhagwant Maan government failed on every front. Who is responsible for routine deaths of youth due to drugs? The police department is in a deep slumber,” added Pandher.

The farmers also demanded the restoration of canal water supply for irrigation purposes.

The state government launched a direct seeding of rice (DSR) portal to facilitate the farmers to give their willingness for area to be sown with the DSR technology. Chief Agriculture Officer Dr Paramjit Singh said on Friday that it would be instrumental in compiling the entire data about each and every farmer, who has opted for the DSR technique, besides ensuring payment of Rs 1,500 per acre after proper verification through this portal to the genuine beneficiaries in a fair and transparent manner.

Appraising the portal, the Chief Agriculture Officer said after proper verification, the incentive of Rs 1,500 per acre would directly be transferred into the bank accounts of the respective farmers. He said this unique portal had been developed and designed by the Mandi Board with the help of the Agriculture Department. With the adoption of this innovative technology, there would be at least 15-20 per cent saving of water, besides helping in effective percolation of water ultimately improving the groundwater level through proper recharging.

This cost-effective technique would also cut down the labour costs by nearly Rs 4,000 per acre. He stated that they had already deployed officials of various departments, including the Agriculture, Horticulture, Mandi Board and Water and Soil Conservation, to oversee the DSR operations meticulously for imparting proper technical guidance to farmers as well as undertaking verification of the area sown under this advanced technology so as to ensure that the payment of Rs 1,500 per acre was only made to the genuine beneficiaries..

He said last year farmers from the district adopted the DSR on 3,000 hectares and this season, they had set a target of 66,000 acres under the technique.