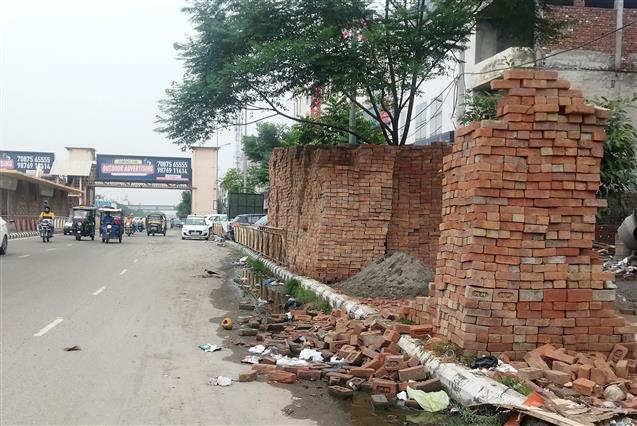 Bricks and gravel lie on a service lane in Amritsar. Photo: Sunil kumar

Dumping of construction material and debris on roadsides continues to pose trouble to commuters, besides congesting operational roads in the city.

These materials can be noticed close to under-construction commercial and residential buildings on roads at many places in the city, thereby posing a threat to the lives of commuters.

Construction material such as sand, gravel, iron and bricks can be seen dumped on roads, shrinking the space on the already congested city roads.

Irked commuters have to put up with this obstacle hindering traffic flow. In violation of norms, people and shopkeepers continue to dump the material on roadsides.

A resident, Bhupinder Singh, said, “Sadly the administration has turned a blind eye towards this problem. Actually, people neither have fear nor respect of law and dump such material on roads. This despite the fact that it is mandatory for a person to take permission from the MC prior to utilisation of roads meant for public.”

Manjot Singh, another city resident, said the construction of buildings was going on the GT road and construction material had been kept in the service lanes, leaving little space for commuters. He said the situation becomes extremely bothersome when this material was dumped in narrow lanes, leaving a little space for commuters.

Construction material for commercial and residential buildings can be seen scattered on roads at many places in the city. Mayor Karamjit Singh Rintu said the staff concerned would be directed to take action against the offenders under the Municipal Corporation Act.