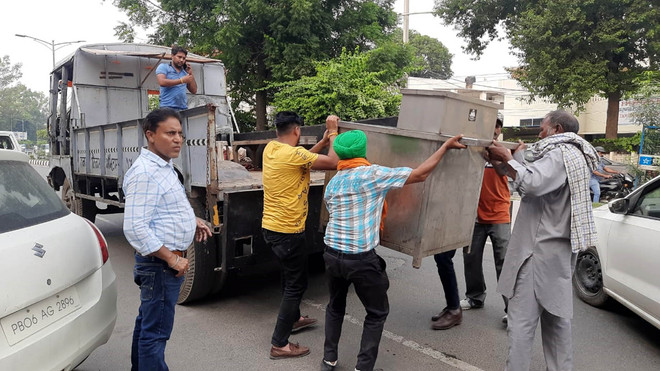 In the view of upcoming festive season, a team of the estate wing of the Amritsar Municipal Corporation, removed encroachments on both sides of service lanes near Chheharta, Khandwala, Putlighar and Kachihari Chowk on GT Road today.

The counters set up on service lanes by a private hospital were demolished and illegal encroachments on the footpaths were also removed from Kachheri Chowk.

Dharminderjit Singh, Estate Officer, Municipal Corporation, said, “We removed several encroachments from the footpaths. The drive has been initiated ahead of the festive season.”

It’s worth mentioning that fruit vendors at Chheharta Chowk had encroached upon the service lane on both sides. However, soon after the MC drive, fruit sellers surfaced again on the same spot.

The Estate Officer said, “We appeal to residents to not illegally occupy the government land, corridors outside shops and and the footpaths. If any person is found doing this, legal action will be taken against him/her.”