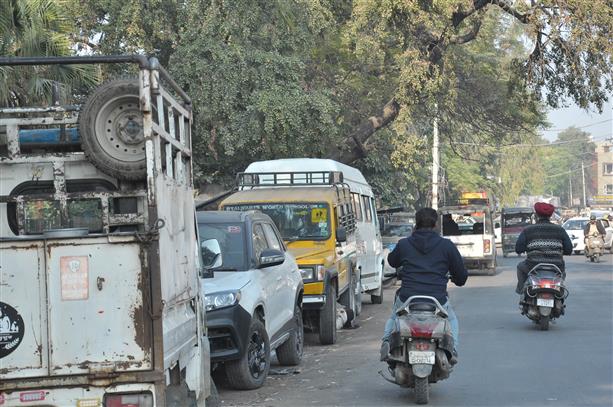 The Truck Wali road, a name derived from trucks being permanently parked on it, is dotted with rampant encroachments.

For commuters coming from the Hathi gate, the stretch is a short cut to the Bhandari railway overbridge (ROB). Notably, the road was relaid in 2016 keeping in view its renewed importance after the stretch between the Hathi gate to the Hall gate remains under constant traffic.

However, parking of heavy vehicles on both sides of the road endangers the lives of commuters. As commuters heading towards the ROB use the Truck Wali road stretch to avoid being caught in the traffic snarls outside the Hall gate. A large number of people still avoid commuting on the Truck Wali road as heavy vehicles parked along the stretch can be reversed any time without bothering about the traffic.

Transport workshops have mushroomed on the road and adjoining stretch falling between the railway station and the Gole Bagh as they park vehicles on roadsides for repair. Consequently, the congestion increases on these roads which slows down the pace of traffic and also traffic snarls. Continuous rise in congestion adds to traffic chaos.

Jarnail Singh of Rani Ka Bagh locality questioned the wisdom of the government in allowing the opening of automobile shops in different parts of the city when there is designated Transport Nagar.