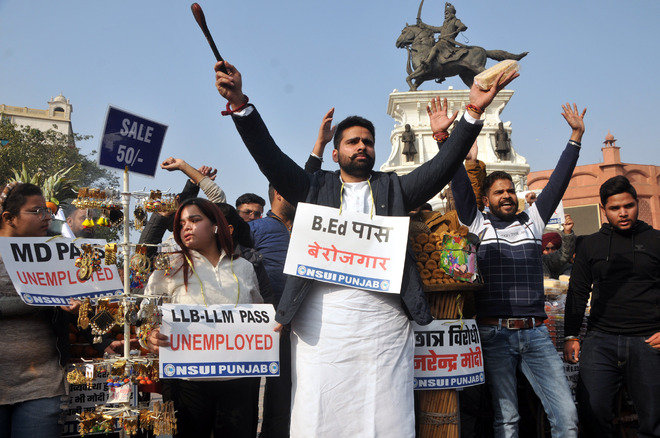 NSUI activists protest against the rising unemployment in the country, in Amritsar on Tuesday. Tribune photo

National Youth Day was celebrated by various colleges and educational institutions and tributes were paid to Swami Vivekananda, whose birth anniversary falls on this day. DAV College marked the day by organising an event through its NSS wing. Dr Neerja Kalia, NSS in charge, DAV College, encouraged the youth from the thoughts and works of Swami Vivekananda on the occasion. “Swami Vivekananda always focused on the potential of youth. He wanted to inspire the younger generation so that they could compete with the British and achieve independence,” she said.

School of Education of Guru Nanak Dev University under the aegis of PMMMNMTT, Department of Higher Education, Ministry of Education, to mark National Youth Day. Prof Anand Bhushan, former chairperson, Department of Education, Panjab University, Chandigarh, addressed the audience of over a hundred participants. He drew a vivid description of the inspirational journey of a humble Swami to the most sought-after Indian after his powerful speech at the First World’s Parliament of Religions in Chicago 1893, at the time when Indians were looked down upon and Britishers were plying to disconnect the Indian masses from their cultural roots.

NSUI members took out a rally at Heritage Street to highlight the plight of youth and joblessness marking the National Youth Day. Slamming the PM for rising unemployment, Punjab NSUI president Akshay Sharma said unprecedented joblessness and desperation among our youngsters was a direct result of Modi’s callous and negligent handling of Indian economy.

Tarn Taran: Workers of the National Students Union of India (NSUI) hosted a ‘Boot Polish Campaign’ on the National Youth Day and burnt the effigy of Prime Minister Narendra Modi today. They marched to the cremation ground of the local Sachaknad road and burnt the effigy of PM. Ritik Arpra, district president of the NSUI, while addressing on the occasion, said the youth was deprived of the job avenues with due to the wrong policies of the government. — OC