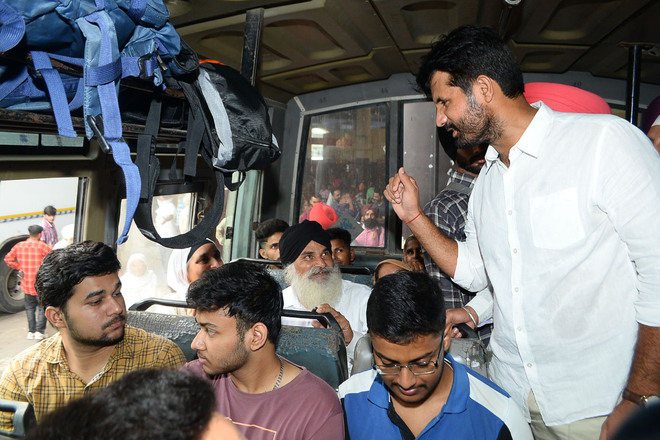 Transport Minister Amarinder Singh Raja Warring made a surprise visit at Shaheed Madan Lal Dhingra Inter State Bus Stand (ISBT) on Sunday, where 20 unauthorised buses of private operators, including one bus of the Orbit Aviation, was impounded due to incomplete documents.

He said: “The evasion of tax, plying of illegal buses and bus mafia will not be tolerated. Every bus, which plies on the state’s roads, will have to pay taxes.” He said Punbus and Pepsu were earning profit of Rs40 lakh per day after the strictness against illegal and unauthorised private buses and bus mafia. He said: “I am trying to increase daily income of the department by Rs1 crore.”

Besides inspecting taxes of buses, trucks and other vehicles, he also directed the officers of the Transport Department to ascertain current condition, including the age, pollution level and safety of the vehicle to ensure that these vehicles do not endanger anyone’s life on roads.

The minister also reprimanded the officials for the lack of cleanliness at the ISBT. Looking at the minister lifting litter, officials in attendance also followed suit and started removing refuse from the ISBT.

He said public places such as bus stands and interior of buses should be clean like one’s own house and warned officials that such negligence would not be tolerated in future.

He interacted with passengers at the ISBT and those in the buses. He said as many as 842 new buses would be added in the fleet of government buses so as to provide better facilities to the passengers in the state. He said soon a tender worth Rs22 crore would be passed to improve the condition of workshops.

Taking a dig at SAD president Sukhbir Singh Badal, he said during his government, state-run buses were ignored and private transport companies were given a free hand.

On the expansion of the BSF’s jurisdiction at the borders of Punjab, he claimed that the secret alliance between the SAD and the BJP was intact. To buttress this, he pointed out that former Union Minister Harsimrat Kaur Badal continues to occupy the allotted house in Delhi and security cover by the NSG. He said no Congress leader in the state has an NSG cover.