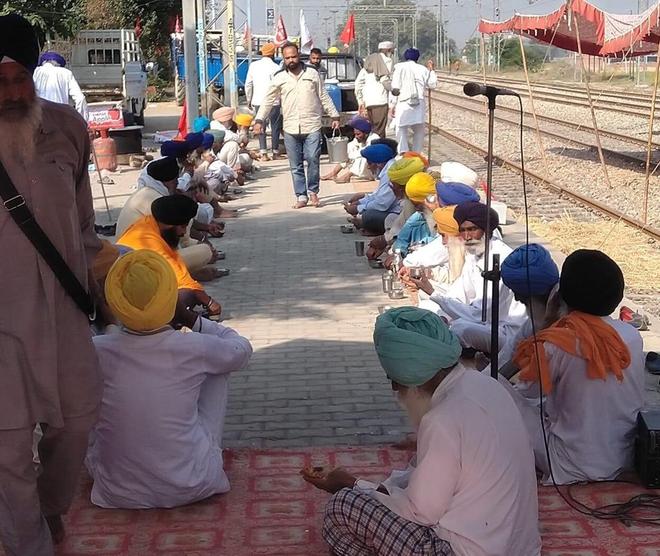 Farmers have langar at the Buttari railway station platform near Amritsar on Thursday. Tribune photo

With farmer organisations deciding to allow passage of goods trains, the protesters shifted their protest from the railway tracks to the platforms at the Buttari railway station near Beas.

The farmers have been sitting on railway tracks for the last 22 days as a mark of protest against the three agriculture-related Acts passed by the Union Government.

Farmer leaders stated that the relaxation to goods trains has been given in view of the Chief Minister’s appeal to allow transport of crucial items like coal, fertilizers, etc. They said passenger trains would not be allowed to pass.

The leaders stated that the Union Government was ignoring the sentiments of society by not reconsidering its stand on the farm laws.

They said instead of making it an ego issue, the Union Government must address their issues. Meantime, their protest at the petrol pumps run by Reliance, at toll plazas and outside the residence of Rajya Sabha member Shwait Malik also continues.

The leaders stated that while the farmers in UP were forced to sell their produce at low prices, the traders earn huge profits by selling the same in Punjab markets.