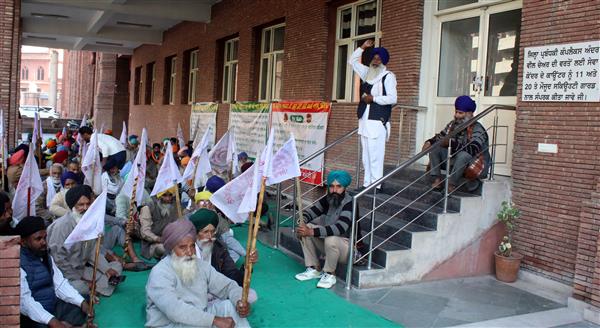 Farmers sit at the entrance to the Deputy Commissioner’s office in Amritsar on Wednesday. Vishal Kumar

Farmers protesting under the banner of Kisan Mazdoor Sangharsh Committee (KMSC) blocked entrance to the Deputy Commissioner’s office here for four hours on the 12th day of the protest here on Wednesday.

Meanwhile, a delegation of the KMSC also met senior state officials in Chandigarh and claimed that the government assured them of accepting all their demands.

However, contrary to the claim, KMSC leaders stated that the protest would continue indefinitely. They stated that they would not end the protest being held at Deputy Commissioner offices in many districts merely on the basis of verbal assurance and would take a decision only after the government issues a notification in this regard.

The association also announced the schedule of the action plan for the protest in the coming days. KMSC general secretary Sarwan Singh Pandher said the protesting farmers would gherao the residences of the MLAs and Cabinet ministers on December 12.

The association has also planned to free all toll barriers on the roads in the state for the general public from December 15 to January 15 to exert pressure on the state government and mobilise public support.

Pandher said the protest would be further intensified in the coming days if the government failed to respond to the demands. “The state Chief Minister is still using derogatory comments against the protesters and this would not be tolerated. In a democracy, the citizens have the right to protest peacefully,” he added.

The farmers are demanding the annulment of the amendments made to Village Common Land rules recently which would displace thousands of settlers tilling common land. They are also demanding a legal guarantee for minimum support price, release of arrears of compensation for farmers tilling land across border fence, shifting of border fence further towards zero line and other demands.