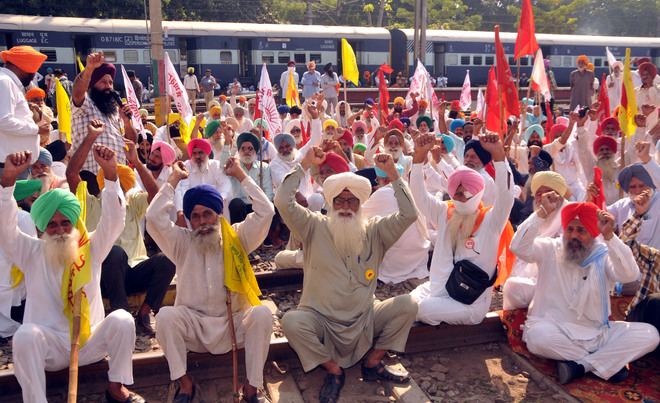 On a call given by the Samyukt Kisan Morcha demanding action against Union MoS Ajay Mishra and his son Ashish Mishra, farmers blocked railway tracks at different places in Amritsar and Tarn Taran districts on Monday. The farmer leaders stated that the BJP government at the Centre was trying to save Minister of State for Home and his son.

The farmers demanded that Ajay Mishra should be immediately sacked from the Cabinet and arrested for planning the murder of farmers by crushing them under the wheels of vehicles.

Farmer leaders Rattan Singh Randhawa, Balbir Singh Dudala, Jatinder Singh Chinna and others demanded that BJP leaders should stop spreading lies and hate against farmers, who had been protesting peacefully for more than a year. They demanded that the three controversial agriculture laws should be immediately repealed.

In Tarn Taran district, the farmers protested at three different places on the Amritsar-Khemkaran railway route despite the fact that the train services have not been resumed after these were suspended due to the Covid-induced pandemic earlier last year.

Activists of the Kisan Mazdoor Sangharsh Committee and unions associated with the SKM staged protests in Tarn Taran city while members of the Jamhoori Kisan Sabha blocked the railway tracks in Patti town.

Sarwan Singh Pandher of the Kisan Sangharsh Committee said, “While the farmers are not getting the right price for their produce, consumers are forced to buy these at much higher prices.” The recent increase in prices of onion, tomato and apples for the consumers can be attributed to the monopoly of corporate houses.

With farmers blocking the rail traffic between 10am to 4pm, the railway schedule got disrupted. Despite that, a majority of passengers showed solidarity with the farmers. During their ‘rail roko’ protest, some trains originating and departing from the Amritsar railway station were affected. The New Delhi-Amritsar Shatabdi, the Saryu Yamuna Express and the weekly Amritsar-Nanded Express were among the affected ones. Besides, popular trains Shan-e-Punjab Express (which arrives here at 2.15pm and departs at 3.15pm) and Nangal Dam Express did not reach the station. Railway officials stated that they did not cancel any trains and would operate them after rearranging the schedule in the evening. The worst-sufferers were passengers of long-destination trains as they had booked their tickets in advance. They cannot afford to forego their reservation despite already knowing announced protest.