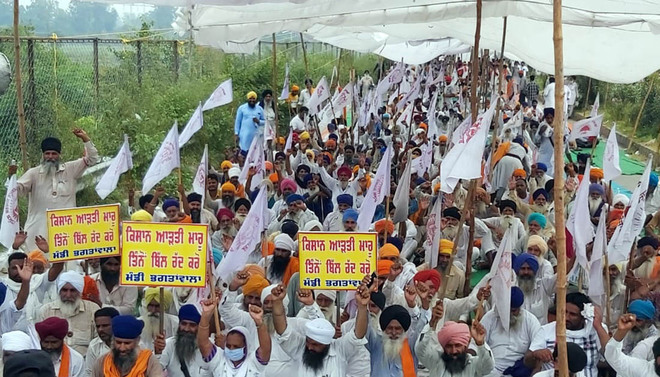 The agitating farmers under the banner of Kisan Mazdoor Sangharsh Committee (KMSC) lifted the three-day blockade of the bridge over the Beas, 35 km from here, on the Amritsar-Jalandhar GT Road, at 3 pm on Wednesday.

The members of the state core committee of the KMSC will meet here (in Amritsar) on Thursday to chalk out the next course of action.

They lifted the protest to end the inconvenience to the public, but did not call off the stir.

Sarwan Singh Pandher, general secretary of the KMSC, said: “The members of the state core committee of the KMSC will meet here (in Amritsar) on Thursday to chalk out the next course of action.”

Meanwhile, the members of the KMSC would continue to hold ‘Jail Bharo Andolan’ at the district headquarters from tomorrow.

They are protesting against the tabling of three agriculture ordinances — amendment in the Essential Commodities (EC) Act, to free up inter-state trade in agricultural commodities and provide a regulatory framework for contract farming in the parliament for their ratification.

Earlier, holding banners and buntings, they had been raising slogans against the Union government and Prime Minister Narendra Modi. They also raised slogans against the NDA government’s alliance partner SAD. They feared that these ordinances after becoming law would dislodge small-time farmers to help private firms to take over.