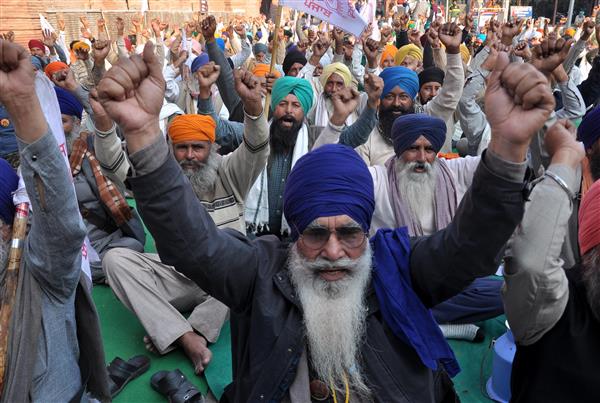 While the farmer unions comprising the Samyukt Kisan Morcha held a protest in Chandigarh on Saturday, the Kisan Mazdoor Sangharsh Committee (KMSC) initiated an indefinite protest outside the Deputy Commissioner’s office here. A KMSC leader said the protest would continue until their demands were accepted by the government.

KMSC president Satnam Singh Pannu said the protests had been initiated in 10 districts of the state. The farmer leader stated that the state government had amended the Punjab Common Land Act that would displace thousands of farmers in the state.

Pannu said they demanded from the government to revoke the amendments made to the Act. “The Centre had promised to give legal guarantee to the MSP which it has failed to provide till date,” said Pannu.

The farmer leader also demanded immediate release of the arrears of the farmers, tilling their land across the border fence. He also demanded the displacing of the barbed fence towards the Zero Line so that the farmers do not have to cross the fence to access their fields.

KMSC general secretary Sarwan Singh Pandher said the BSF should also give relaxation in time to the farmers with land across the fence so that they can work in their fields for longer durations.

Pandher also demanded the MSP for vegetable crops, implementation of the Land Ceiling Act, and jobs for the family members of those who had died during the farming agitation at Delhi borders. “We demand from the government to implement the Land Ceiling Act and confiscate all surplus land, which is 17.5 acres and distribute it amongst landless,” he said.

The KMSC has also demanded from the state government to fulfill all promises made by it before the elections. “We demand from the government to give a monthly pension of Rs 1,000 to women and increase the old age and widow pension to Rs 2,500 per month,” said Pandher, demanding that institutional loans of the farming community should be waived off.

Tarn Taran: Farmers and workers in large numbers sat on Pakka Morcha in front of the District Administrative Complex (DAC) from Saturday to stress on the demands related to the Union and the state government under the banner of Kisan Mazdoor Sangharsh Committee, Punjab.

Womenfolk and youngsters in large numbers too were present at the Pakka Morcha which was being presided over by Satnam Singh Manochahal, district president of the KMSC.

Besides Satnam Singh Manochahal, Dial Singh Mianwind, Harbinder Singh Kang and Dhanna Singh Lalughuman were among those who addressed the gathering on the occasion.

The farmers who lost their lives in the Delhi Morcha were paid rich tributes at the beginning of the Pakka Morcha. The leaders in their respective address condemned the police that these were framed to favour the corporate sector at the cost of farmers and the working class. As a result, people in the country had to face hardships and struggle to overcome poverty.

The leaders condemned the state machinery and government for failing to check drugs and said the Punjab Police had expressed its inability to check the drug menace as the DGP had said that the threat was widespread in the state.

The leaders said corruption, unemployment and lawlessness were the other problems which the government had failed to resolve.

Privatisation, pro-corporate and other alleged anti-people policies had led to the sale of the public institutions like railways, education, health, and water supply to the corporate sector.

The farmers and workers had made arrangements to stay at the morcha site at night and were even arranging for their meals there.