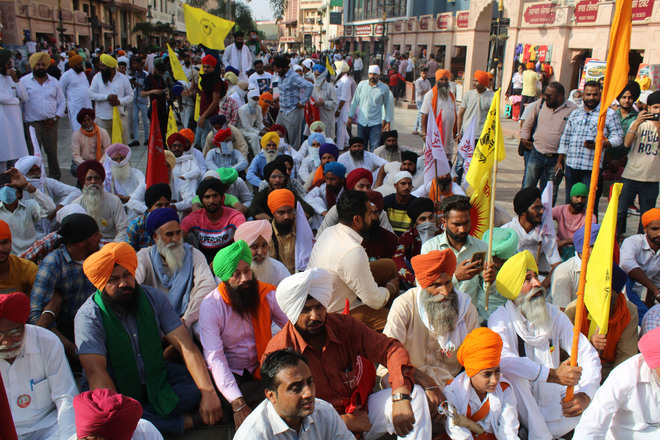 Farmers under the Sanyukt Kisan Morcha pay tributes to martyrs of Jallianwala Bagh in Amritsar on Tuesday. Photo: Vishal Kumar

Farmers under the banner of the Sanyukt Kisan Morcha paid tributes to the martyrs of Jallianwala Bagh massacre by organising a gathering on road outside the memorial, which was closed in February last year for renovation.

The farmer leaders said 102 years ago, the British government killed hundreds of peaceful protesters who had gathered to protest against them. The farmers said the present government at the Centre was moving on the same lines as over 350 farmers have died during the ongoing protests at Delhi borders but it had failed to accept the justified demands of the farming community.

The leaders exhorted farmers to take inspiration from the martyrs of Jallianwala Bagh massacre and continue the protest till the three controversial laws were repealed. The farmer organisations also criticised the government’s plan of setting up a ticket counter outside the memorial. They said people would launch another agitation if the government did not abandon its plan to set up the ticket counter.

Leading the protest, farmer leader Balkar Singh Dudala said: “Like the British government, the present rulers, too, are working against the common masses.” He said the three agriculture laws would destroy the farming community and benefit the corporate.

Another leader Rattan Singh Randhawa said: “The farmers’ protest at Delhi borders will soon complete five months. The government is indifferent and focused more on elections. Any sensitive government would have by now addressed the issues of the agriculture sector.” He said the protest would continue till the demands of farmers were accepted. Others who addressed the gathering included Davinder Singh Chattiwind, Harjit Singh Jheeta, Mehtab Singh Sirsa, Bachittar Singh, Hoshiar Singh Jhander and others.