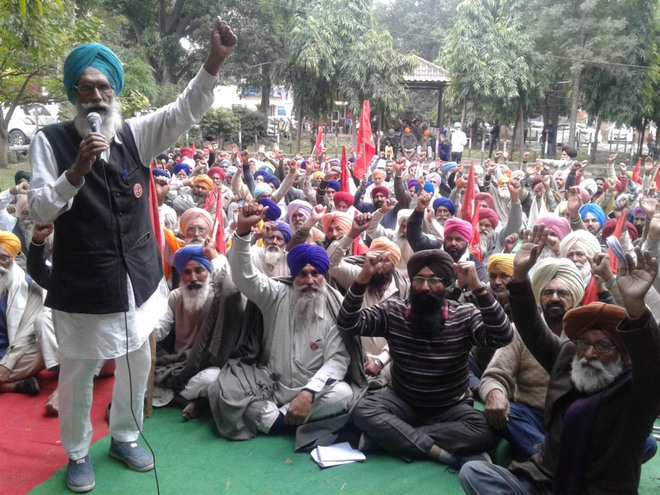 Farmers stage a protest outside the DC office in Amritsar on Wednesday.

Leaders demanded financial assistance for all farmers irrespective of the paddy variety they grew.

Satnam Singh Ajnala of the Jamhoori Kisan Sabha said, “This time the monetary benefit has not been announced for farmers who had sown basmati varieties. The residue of basmati varieties too is burnt and cases are registered against farmers for burning the same. It is illogical to exclude basmati growers from the list of beneficiaries.”

Another farmer leader, Rattan Singh Randhawa, said they had also raised the issue of “undue” interference of village panchayats in selecting eligible beneficiaries. “Being political bodies, panchayats are partial. This is no secret. Instead the survey should be conducted by government agencies to select beneficiaries.”

Jatinder Singh Chinna of the Kirti Kisan Union said they also raised the issue of ‘kurki’ (seizure) of land by banks for failure to repay loans. Still harassment is being meted out to farmers by banks and other financial institutions, he said.

Farmer leaders also demanded from the government to keep a check on the markets so that the farmers are not fleeced. “It is very astonishing that when farmers go to sell their crop, it is purchased at a meagre price and the day it reaches stores, the prices start shooting up,” said farmer leader Balwinder Singh Dudala, adding that the middlemen earn maximum profit while agriculture had become a loss-making venture.