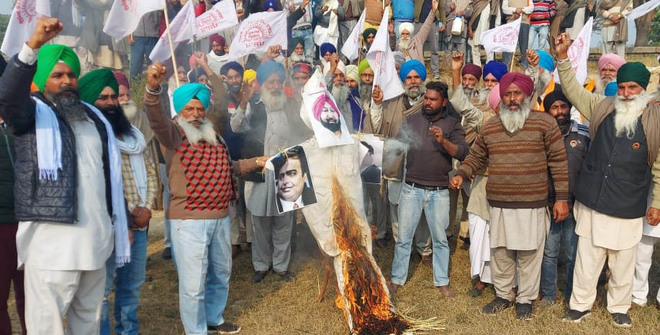 The farmers’ protests against the agri laws implemented by the Centre entered the 73rd day in Jandiala Guru.

The kisan union leaders said they would not accept any condition of the Central Government and the latter to revoke the controversial laws.

The farmers also burnt an effigy of the state government and criticised Chief Minister Capt Amrinder Singh’s statement on the farmers’ stir.

The Centre wants to amend the agri laws, which would be a betrayal. Just as the Britishers cheated, the Union Government also wants to deceive us. We have single demand to repeal three agri laws, the Electricity Amendment Bill 2020 and the recent amendment in the Environment Protection Act.

Sarwan Singh Pandher, general secretary, Kisan Mazdoor Sangharsh Committee, said, “The Centre should assure minimum support price on all crops. Around 25 vehicles of the union are going daily to Delhi. On December 11, more than 500 tractor-trailers will leave for Delhi.”

Addressing the activists during the ‘rail roko’ protest in Jandiala Guru, Pandher said Capt Amarinder’s statement (farmers are a threat to national security) is highly objectionable.

Gurbachan Singh Chabba and Jarmanjit Singh Bandala said the central leadership of the Congress had convened a special session by Sonia Gandhi and Priyanka Gandhi demanding repeal of the agri laws while Capt Amarinder was speaking on the behalf of the BJP.

Meanwhile, a group of residents from Malanwali village and members of the Amritsar Bar Association led by Advocate Kuljit Singh left for Delhi to participate in the agitation.