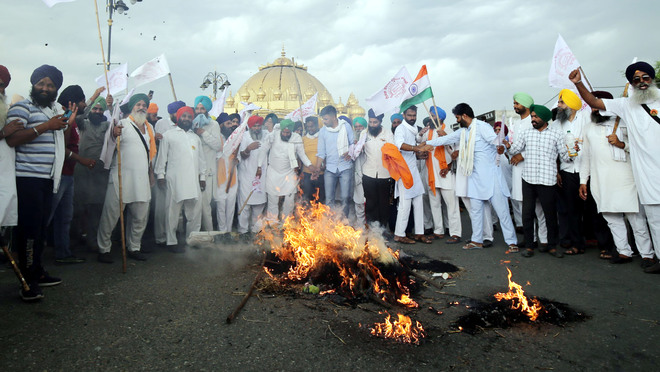 Farmers burn an effigy of the Centre during a protest against three agri laws on Independence Day in Amritsar on Sunday. Vishal Kumar

A motorcycle rally amid the ongoing protest against the three controversial agriculture-related laws was organised by farmers under the banner of Sanyukt Kisan Morcha on Sunday.

Apart from a march outside Company Bagh, similar events were organised at Majitha, Mehta, Rayya, Kathunangal, Ajnala, Chogawan, Attari, Sarai Amanant Khan and other places. Many farmers carried the Tricolour during the march.

Farmer leaders said the participation in all events was inspirational as farmers joined the cause in large numbers. Farmer leaders Baldev Singh Saidpur, Balwinder Singh Dudala, Sawinder Singh Meerakot, Sukhrambir Singh Loharka, Davinder Singh Chattiwind, Dhanwant Singh Khatrae Kalan said despite over 500 deaths during the agitation, farmers were upbeat and committed to continue the fight against the draconian laws.

Rattan Singh Randhawa said the participation of farmers at protests going on at Delhi borders would be increased in the coming days as farmers are now free from paddy transplantation work.

On the 75th Independence Day, different farmer organisations lodged their strong protest against the three farm laws demanding to repeal these. The agitating farmers also burnt the effigies of the Union Government on the occasion.

Hundreds of workers of Kisan Mazdoor Sangharsh Committee, Punjab, with black flags in their hands marched in the villages of the district and gathered in front of the District Administration Complex (DAC).

The leaders strongly condemned the alleged indifferent attitude of the Centre. They said we were yet to get freedom from the clutches of imperialism and the corporate sector, which was holding onto a major share of the economy even after 74 years. The leader said there was just one ‘East India Company’ against which our martyrs fought but now, there were hundreds of companies exploiting our countrymen with both hands. The workers of the organisation held a candle march in villages to raise awareness among farmers and other sections of society. farmers and mazdoors burnt effigy of the Union Government in front of the DAC with sloganeering in favour of their demand. The farmers’ organisation affiliated with the Sanyukt Kisan Morcha including the Bharti Kisan Union (Rajewal), Kul Hind Kisan Sabha, Jamzhoori Kisan Sabha, too, organised a flag march in the area. The workers of the organisations held a rally in front of the local SDM office. The farmers under the banner of Azad Kisan Sangharsh Committee, Punjab, held a motorcycle march in the area. Nirvail Singh Daleke and other leaders stressed for the end of pro-imperialism multinational companies, which were exploiting our natural resources.