Fatality rate 3.29%, no improvement even as cases dip in Amritsar district

Cause for concern : District’s death rate much higher than the national average of 1.2 per cent 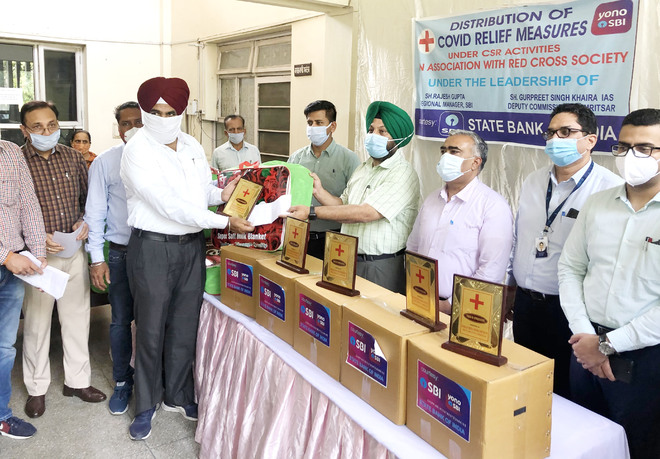 The district administration on Tuesday honoured employees who have been helping in cremation of Covid-19 patients.

The Coviud-19 infection has started to recede but the fatality rate of patients still continues to be on the higher side as the district’s death rate is much higher than the national average.

With 45,671 positive cases and 1,505 deaths till date, the district has a fatality rate of 3.29 per cent. The district’s fatality rate is much higher than the national average of 1.2 per cent.

The number of deaths after April 1 has also increased by almost 122 per cent with the district reporting a total of 829 deaths in the last two months. The fatality rate of Covid patients has slightly increased to 3.36 per cent during the second wave of the infection.

The fatality rate of Covid patients stood at 3.21 per cent prior to April 1. The district health authorities said the death rate in the district was higher as most of the patients report at the hospitals only after their condition becomes critical.

“We have seen patients reporting at the hospital when their oxygen saturation level has dropped below 50. In such conditions, if a patient is having any co-morbid conditions, it becomes difficult for doctors to save the patient,” said a Health Department official.

Health experts said people should get tested for Covid-19 immediately after they experience any symptom associated with the disease.

Honoured for giving the dead a decent burial

Amritsar: The district administration on Tuesday honoured employees who have been helping in cremation of Covid-19 patients. DC Gurpreet Singh Khaira said though every officer and employee has done a great job since March 2020, the most difficult and important task was to cremate bodies, which poses variety of physical and mental challenges. He said a team working under the leadership of SDM Vikas Hira has so far cremated more than 2,000 persons. “Whenever a person dies, the team takes care of the body and performs rituals according to his/her religion,” he said. He said during the initial days of the pandemic, there were many cases when family members refused to go to the crematorium. In such cases, these men ensured that the deceased were cremated with dignity. Khaira said 17 persons include employees of the Health Department, Tehsil Office and Municpal Corporation. The DC honoured each team member. Those who were felicitated included Tarjit Singh, Dilbag Singh, Baljit Singh, Iqbal Singh, Mangal Singh, Charanjit Singh, Bhupinder Singh (all drivers), Kuldeep Singh and Arun (sewadars), Lucky, Harpreet Singh, Sandeep Singh, Kirpal Singh, Shiva, Ankit, Sahil Singh, Akashdeep Singh, Harpil Singh (all cleanliness workers). TNS