Filth finds its way on this nameless road 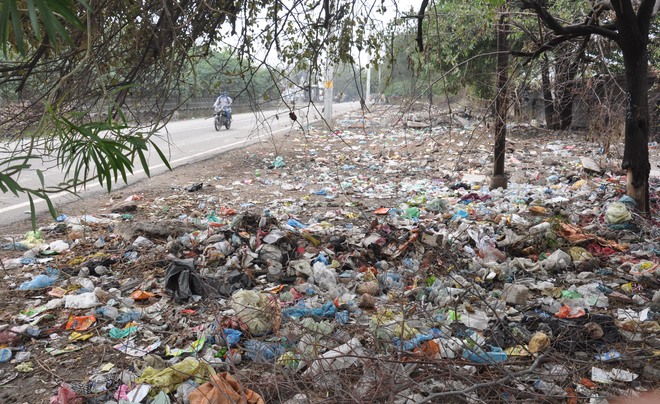 Dirty picture The road between Rego ROB and the railway crossing Islamabad area has turned into a garbage dump. Photo: Sunil Kumar

Residents here have been demanding removal of huge garbage dumps along the sides of the stretch connecting the Islamabad area to Rego Railway Overbridge (ROB).

Many important areas fall along the 1-km stretch such as defence area, railway station’s loading and unloading cargo facility, railway’s residential B-block Colony and a gurdwara. The road is also of strategic importance as it diverts the traffic heading towards Islamabad area to take a detour from the GT road via Rego ROB. Similarly, the commuters travelling from Islamabad to the Civil Lines area need not go via congested Puttalighar.

The width of the stretch is also not regular. However, as per the Municipal Corporation records, its paved road is 30-ft wide and the kuchha portion on the railway side is 15 to 16 ft wide and along the Defense area, it is eight feet wide.

Chander Kumar, a resident of Islamabad area, said, “Despite being so significant for the commuters, it never figured in the priority list of the authorities. Hence, the stretch never earned any name.

Both the sides of the stretch are dotted with garbage, debris and other refuse. “It has become a breeding ground for mosquitoes. It also emanates an unbearable stench.”

Sohan Singh, a resident of B-block, said despite repeated complaints, the road became a dumping site. It not only is an eyesore but can also become a source of several diseases. He added that a large number of those tourists coming out of the Gobindgarh fort heading to the Attari Wagah border Joint Check Post to witness the retreat ceremony commute over this stretch. The authorities must spare a thought about what impression they might be taking along.

Vikas Soni, area councillor, said with the rise in traffic flow on the GT road, the stretch has assumed importance among the commuters. “I have already initiated the process of re-carpeting and end-to-end tile work. This will end the practice of disposing garbage along its sides,” he said.