Rapid antigen test of passengers being conducted by Health Dept 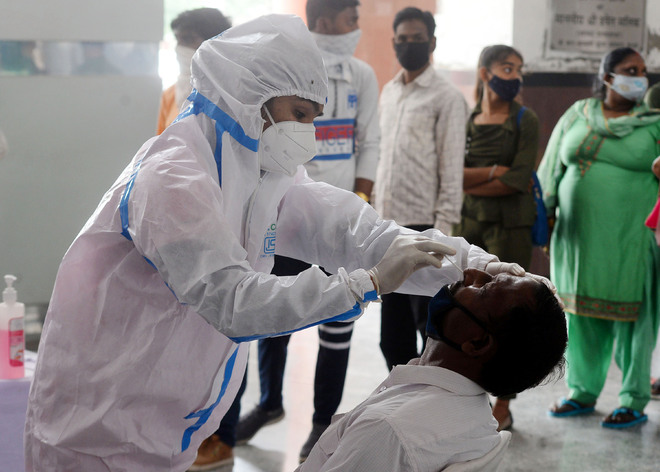 A health worker takes the swab of a passenger at the railway station in Amritsar on Thursday. Tribune photo

The Health Department, on the directions of the state government, started conducting the rapid antigen tests (RAT) of passengers at the railway station on Wednesday, but slack preparations were witnessed on the very first day, as of six persons who tested positive, only one could be traced later.

According to information, the Health Department conducted tests of around 80 passengers before the departure of the train for Jaynagar, of which six passengers tested positive. When the reports arrived, passengers were already aboard. Efforts were made to trace them, but since their details — such as their seat and coach numbers — were not taken, the exercise proved futile. Announcements were also made where the names of positive patients were called out, but to no avail. Later, the train left the station with five positive passengers.

When the Government Railway Police were trying to locate the passengers, only one woman, who was about to board the Saryu Yamuna Express for Banaras, could be traced. Later, she also left the station without informing the health officials.

The state government had decided to conduct the RAT for passengers arriving and leaving Punjab. The Railways officials said they were only responsible for the operation of trains and if the government wants to test passengers, the Health Department should make proper arrangements at the railway station. The report of rapid antigen test arrives within 30 minutes. In case someone tests positive, the health team conducts the RT-PCR test for confirmation.

Civil Surgeon Dr Charanjit Singh had deployed a team of Health Department at the railway station. The team is conducting tests for all passengers arriving from other states and those who are leaving the city.

On Thursday, the Health Department claimed to make all arrangements. As many as 48 passengers took the RAT, of which two tested positive. As per the protocol, passengers after taking the RAT would further go for the RT-PCR test, if positive. After the report of RT-PCR comes out positive, the department will quarantine such passengers.

We have made all arrangements for contact tracing of those who will test positive in the RT-PCR. We do not allow passengers to board the train. We also inform the health team of the area concerned to trace the contacts of the person and quarantine them. If someone escapes from the railway station after getting the report, doctors can’t chase them. There are several exit points at the railway station. Passengers should cooperate with the health teams to defeat the pandemic. —Dr Amarjit Singh, Assistant Civil Surgeon