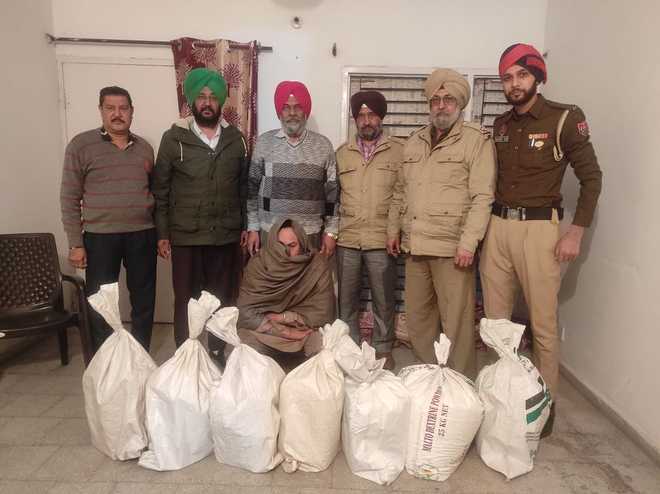 The accused in the police custody with seized material. Gurbaxpuri

In a raid at Ghadhum village here on Saturday, a police party, headed by Sub-Inspector Sukhraj Singh, in-charge of the CIA, Patti, busted a six-member gang involved in producing spurious milk. The police arrested Jajj Singh, one of the gang members, while the others absconded.

The police said five of the gang members were residents of Ghadhum village in Tarn Taran district while the sixth one was a resident of Dhaddrian Kalan in Ludhiana district.

The police confiscated 25 kg of dry milk (Maltodex Treen powder) and 72 ltrs of refined oil stored in the joint house of Jajj Singh and Bhajan Singh. The police said the accused of Ghadhum village used to produce spurious milk and Romesh Singh would carry the milk in a van and supply it to different shops in Ludhiana and other districts.

The accused had been booked under Sections 307, 328, 272 and 273 of the IPC by Harike police. The police said spurious milk could cause serious health problems like heart problem, cancer and sometimes even lead to death. It was also called white poisons.

Sub-Inspector Sukhraj Singh said Jajj Singh was produced in a court which remanded him in one-day police custody. The police have launched a hunt to nab the other accused.