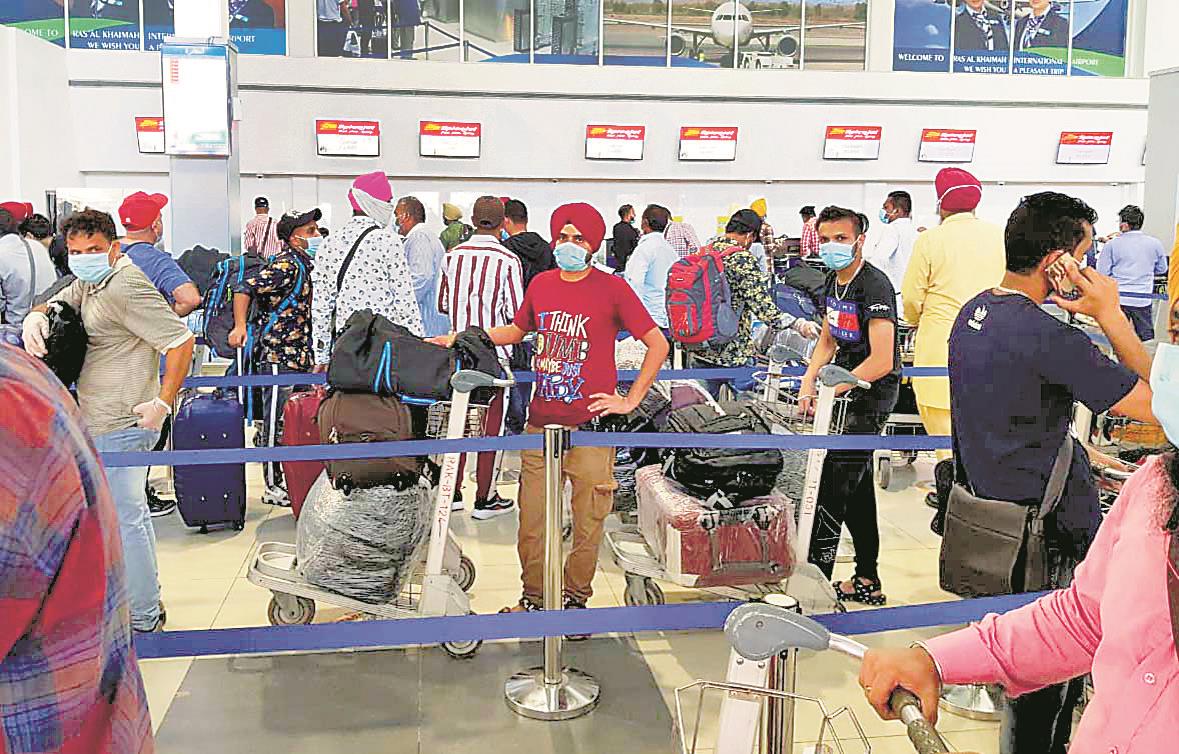 The flight touched down at Chandigarh airport on Tuesday night. Tribune photo

As many as 16 Gurdaspur boys, who were among the 177 persons who returned from Dubai through a chartered flight that landed in Chandigarh last night, narrated their tales of woes after companies, where they were employed for the last few years, suddenly gave them the pink slip following the Covid-19 outbreak.

Jugraj Singh, hailing from Pakhoke in Dera Baba Nanak block, was curtly informed by the officials of the construction firm, with whom he had been working since 2012, that they were left with no other option but to fire him as building activity throughout Dubai had come to a standstill. He was not paid his dues despite the fact that he was legally employed and whatever he had saved was spent on medicines after he slipped into depression.

“Just before Covid outbreak, nearly 25 per cent of the earth moving and allied construction equipment of the world was deployed in Dubai. Such was the hectic pace of construction activity. However, in the first week of March, as the Covid scare grew in magnitude, work came to a grinding halt. We were told by officials that they could no longer pay us and subsequently we were fired. We slept on empty stomachs for days together before somebody asked us to get in touch with businessman Surinder Pal Singh Oberoi. Unfortunately, he was in India, trapped in the lockdown, but nevertheless, he told us to get in touch with his office in Dubai. His charitable organisation — Sarbat-Da-Bhala — chartered a flight, which finally brought us back to India. Not even a single rupee was taken from us,” Jugraj said.

Peter Masih Sidhu and Deepak Kumar, too, had similar tales to tell.

The flight touched down at Chandigarh airport late last night. The boys were received by Oberoi and his brother Gurjit Singh Oberoi. No officials were present.

“This is the first of the four flights chartered by my organisation. Three more flights will be arriving on July 13 (Amritsar), July 19 (Chandigarh) and July 25 (Amritsar), respectively. Each flight costs around Rs40 lakh. We will keep on chartering planes till the last of the stranded men reach home, irrespective of the fact whether they are Punjabis or not. All 177 people who returned yesterday were made to undergo Covid tests at Dubai itself. Each test cost 40 Drihams (Rs800 approximately) and the total expenditure incurred by us totaled nearly Rs1.41 lakh,” said Oberoi.

“In Dubai, when the lockdown was introduced, the construction sector was deemed to be a vital sector, exempting it from government restrictions. Construction sites were permitted to remain operational and workers continued to commute to and from the site, subject to obtaining a permit from the Dubai Municipality and the Permanent Committee for Labour Affairs. However, later, all activity was stopped as things on the Corona front got from bad to worse. Thousands of labourers were stripped off their jobs,” said Oberoi.