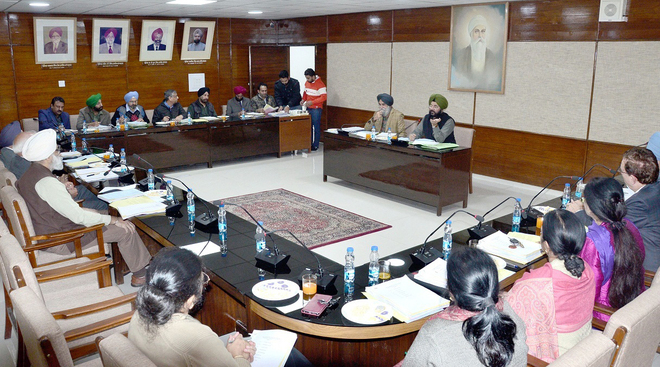 A Syndicate meeting in progress at Guru Nanak Dev University in Amritsar on Thursday. Tribune photo

In a first, Guru Nanak Dev University has decided to dedicate a space to preserve the literary legacy of eminent novelist Nanak Singh within the Bhai Gurdas Library. This decision was taken at the Syndicate meeting held here on Thursday. The space will be created in the form of a museum, which will house Nanak Singh’s original handwritten manuscripts, his correspondence with important literary personalities, historic photographs, awards received by him and artefacts of personal use. Nanak Singh’s most notable work is his poem “Khooni Vaisakhi”, which was written in the aftermath of the Jallianwala Bagh Massacre in 1919.

Prof Jaspal Singh Sandhu, Vice-Chancellor, presiding over the syndicate meeting, said the acclaimed writer was part of the intangible literary heritage of the city and so the museum would help promote and create awareness regarding his works among the new-generation readers.

In an another significant decision, the university will also frame a policy for intellectual property rights (IPR) with the objective of fostering, stimulating and encouraging creative activities in the widest sense in the areas of technology, science, arts and management. Through this, the inventions and discoveries made in the course of university research may be made readily available to the public through channels of commerce. This will be done keeping in view the services rendered by various departments of the university in various fields.

The meeting was attended by Prof KS Kahlon, Registrar, Prof SS Behl, Dean (Academic Affairs) and members of the Syndicate.

Prof Sandhu mentioned the successful organisation of its 50th Foundation Day and Ik Noor, an interfaith confluence, to mark the 550th Prakash Purb of Guru Nanak Dev. He informed that the Ministry of Youth Affairs and Sports, Government of India, had allotted four Centres of Excellence in Sports to Guru Nanak Dev University in the specialties of athletics, fencing, cycling and swimming. The centres would be fully funded by the Government of India, which will identify young and talented sportspersons of nearby schools.

The Syndicate also accorded its approval to award honoris causa degrees at the forthcoming 46th annual convocation to Dr Naresh Trehan, a noted heart surgeon, and actor-director Pankaj Kapoor. Dr Trehan will receive a Degree of Doctor of Medicine - in the Faculty of Medical Sciences and Pankaj Kapoor will be awarded a degree of Doctor of Philosophy in the Faculty of Visual Arts and Performing Arts.

The university would start a diploma course in Persian (part-time) from the next academic session. Also, it was decided to provide more concessions for the wards of the Kashmiri migrants and Kashmiri Pandit/Kashmiri Hindu Families (non-Migrants) living in the Kashmir valley for admission in higher educational institutions during the academic session 2020-21.