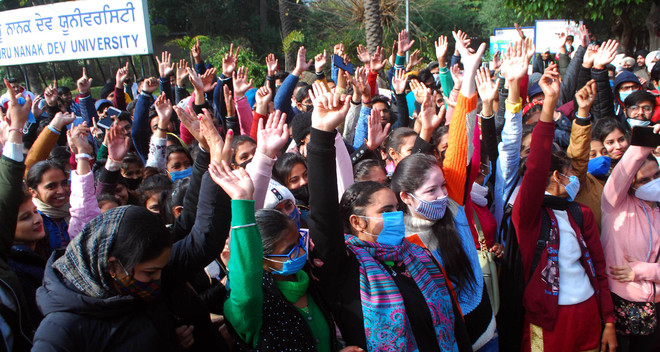 Hundreds of students, including office-bearers and members of state units of ABVP and Student Struggle Front, on Tuesday blocked the GT Road in front of the main gate of GNDU for nearly two hours in a protest against the conduct of offline exams. Extending their demand to shift the exams to online mode and extension of offline exams by the university, the students pulled through the barricades by GNDU security officials to reach VC office.

Registrar KS Kahlon, dean Student Welfare, Prof Hardeep Singh among other officials from university held talks with the students and announced that the offline exams for affiliated colleges under the varsity will be postponed till January 18. The varsity officials told students that they will be holding meeting with principals of all colleges to decide how to take up the matter further.

The students have been demanding the university to conduct exams digitally citing that Punjab Technical University, Panjab University and Punjabi University, Patiala, have done the same in given circumstances. The two-hour blockade of GT Road by the students resulted in traffic chaos and inconvenience for commuters.