After staging sit-in, submits memorandum to the Dean, Registrar

A delegation of representatives of seven student organisations created a commotion outside the Vice-Chancellor’s office on the campus of Guru Nanak Dev University here today. The delegation wanted to hand over a memorandum of their demands to VC Prof Jaspal Singh Sandhu. 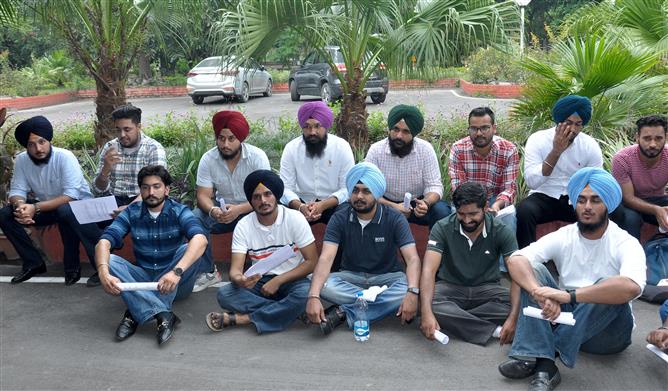 When the delegation was prevented from entering the VC office by the campus security staff, they engaged in a verbal duel, following which the students sat on dharna outside the office.

It was only after the intervention of the campus authorities that the delegation was later allowed to meet the Dean, Academic Affairs, and Registrar, who listened to their demands.

Revival of student body elections in the university and fee regulation on par with Punjabi University, Patiala, were the key issues raised by the student representatives.

While these issues are not new and have been raised time and again by the students, the university authorities assured them that a meeting with the Student Action Committee that has been formed by the student organisations will be held within a week.

“We discussed the demand for fee scale equivalent to Punjabi University, the right to give exams in Punjabi, free booking of auditoriums, car tags for research scholars, transparent students’ elections with the authorities.

Earlier, when we arrived to peacefully submit the memorandum to the VC, the security personnel stopped us and even called the police. Later, the committee was told that the VC was not in the university, following which the students held a protest outside the office,” said Gurvinder Singh, a student of mass communication and member of “Satth”, a student organisation.

The GNDU broke into the elite club of top 50 national universities in this year’s rankings released by the Ministry of Education. While the university has commenced 20 new courses over a period of time, lack of funds and no grants announced in the Punjab budget for GNDU has directly had an impact on students. The university has not been able to offer fee waivers, citing lack of funds.