GT Road, service lane are paths that open to horrible experience for commuters

While the former is potholed, the service lane from Putlighar intersection to Kabir park has worn out for want of repairs & neglect 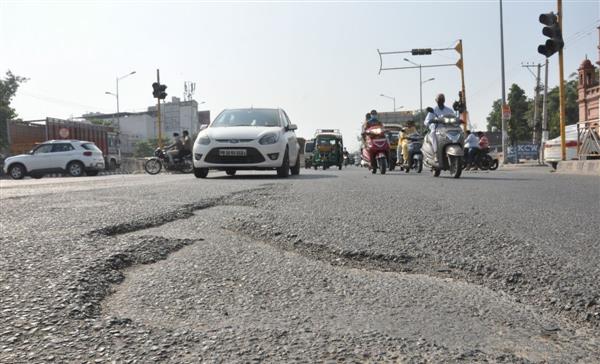 A potholed stretch on the road near Khalsa College for Women in Amritsar. Sunil Kumar

The failure on the part of the authorities concerned to repair the GT road and the service lane — from the Putlighar intersection to the Kabir park — has led to the upper surface of the road to come off at places.

The road and service lanes were laid after the construction of the BRTS corridor about four years ago. Moreover, major educational institutes like Guru Nanak Dev University, Khalsa College, Khalsa College for Women and Polytechnic are situated along it. Besides, the stretch connects the city to Attari village on the international border.

In addition, service lanes were provided on either side of the stretch to provide safe passage to small vehicles, pedestrians and people coming out of residential areas.

People have encroached upon the service lane as per their convenience. Some have installed their carts selling fruit and vegetables, construction material like gravel, sand, bricks and many other things. Many plants have withered away for want of their upkeep and due to the indifferent attitude of people working and living around these.

Owing to the impact of massive movement of vehicles, the top layer of the service lane has worn out completely and a lot many potholes have emerged making driving along the stretch a risky affair. Manjit Singh, a shopkeeper, said no official ever bothered about taking stock of the road after it was laid about four years ago.

People have encroached upon the service lane as per their convenience. Some have installed their carts selling fruit and vegetables, construction material like gravel, sand, bricks and many other things. Many plants have withered away for want of their upkeep and due to the indifferent attitude of people working and living around these.

The condition of the service lane is deplorable as the upper layer has come off and pebbles can be seen strewn all over the stretch posing a threat to the safety of motorists.

Parminder Singh, a chemist, said potholes appeared at certain spots on the main road sometime ago. In the absence of timely repair, more and more potholes started emerging.

He said there were more chances of fatal accidents taking place. A majority of the vehicles on the highway are moving fast and any miscalculation can be disastrous.

Surinder Chowdhury, area councillor, said staff of the company concerned damaged sewerage and water pipes on the same stretch while laying the road. He said residents of the area had to face many difficulties. Recently he got all these repaired after the Municipal Corporation (MC) passed a budget of Rs 16 lakh.

He admitted that the road had been damaged at certain places and the service lane was in a deplorable condition and needed immediate attention. He said he would write to the authorities concerned to draw their attention to the infrastructure lapses and the need of timely repairs and maintenance.