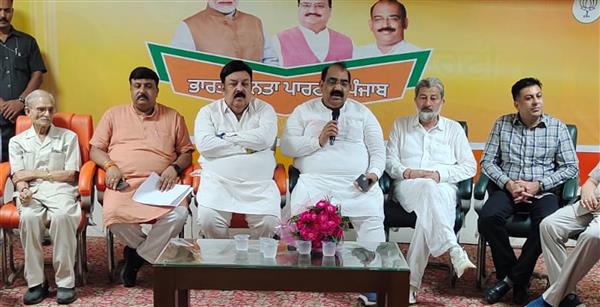 The district unit of the Bharatiya Janata Party (BJP) will sell national flags at a cost of Rs 25 from August 13 and this campaign will continue till the Independence Day.

State BJP head Ashwani Sharma announced this here on Friday after holding a meeting with party leaders to mobilise the workers for party’s “Har Ghar Tiranga” campaign under the aegis of Azadi Ka Amrit Mahotsav.

To encourage people to bring the Tricolour home and hoist it to mark 75 years of independence, he said stalls would be put up close to educational institutions.

Tricolour to be hoisted in 3 lakh households

The district administration has announced that flags will be hoisted in nearly three lakh houses in the district. DC Harpreet Singh Sudan on Friday conducted a meeting with Additional Deputy Commissioner (Rural Development) Ranbir Singh Mudhal, who is the nodal officer for the campaign. Mudhal said, “A common citizen has been given the right to hoist the flag for the first time as this ceremony was earlier done by political or administrative officials only.” Mudhal said, “Common citizens are requested to take care of the dignity of the national flag while hoisting it and after the end of August 15 maintain it accordingly.”

In his address to the workers, he said, “The BJP is organising house-to-house tricolour campaign at the national level. I request all officials to make this programme a success.” He said there should not be any house without the Tricolour this Independence Day. He directed office-bearers of the district unit to form teams to make this programme a success at booth level of all Assembly constituencies here.

With a view to pay tributes to those who died in the communal pogrom preceding the Independence Day, he announced that a motorcycle rally would be held on August 9.

On a tour to three districts of the Majha region to mobilise the workers, he today visited Majitha and the holy city.